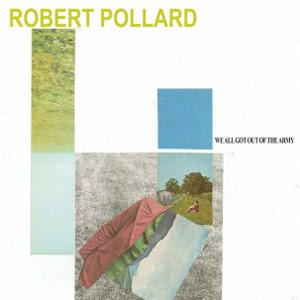 Following in the footsteps of the majestic feats set forth and accomplished by the Fading Captain in 2009, 2010 saw the release of two full-fledged Robert Pollard solo LPs. First up, We All Got Out Of The Army, a 17 song affair from Robert Pollard and producer/multi-instrumentalist/Circus Devils side-kick Todd Tobias.  Like the LP before it, Elephant Jokes, We All Got Out Of The Army is another fairly hooky, immediately arresting LP from Pollard that eventually breaks off into a somewhat dizzying no man's land.  Suffering from a bogged down middle, many tracks on the LP play out rather mediocre, to flat-out bad  (i.e."Rice Train."), We All Got Out of The Army is a top heavy, but worthy LP in the Pollard cannon.

Side A:
Silk Rotor- 5  Best song Pollard has done in years up to this point.  Awkwardly arranged, dynamic verses break into a breezy chorus with a great, classic late GBV era lead guitar line.  Refreshing. Extended instrumental ending akin to “My Kind of Soldier’s” grand statement gets major points.

I Can See- 5 Amazing second song, pails only slightly to “Silk Rotor.” Steadier, more subdued but harks back to late-period GBV.

Post-Hydrate Update- 4 Vocal melody recalls Mag Earwhig-ear GBV. “She ran off with an elephant and a reindeer,” solo vocal in the middle deducts half-to one full point.

On Top of the Vertigo- 3 Standard Gargoyle Decision leftover? Thankfully, no prog-rock tricks ruin this one. First harder song of the album. Decent effort.

Talking Dogs- 2 Short number, with semi-cheesy guitar sound/line that could be from a Jimmy Buffet song. Vocals off-key. C'mon Pollard.

Wild Girls- 2  Abbey Road Side 2 inspired acoustic number, sounds like something worth taking a few looks at if it were in the Suitcase box. Not here though.

Cameo of a Smile- 3  Rocking verses, into breezy chorus. Average verse, plus average chorus equals okay song. How’s that for a math equation?

How Many Stations- 3 Decent guitar riff, with Circus Devils inspired synth work. Could’ve been included on Sgt. Disco if that album weren’t already so bloated.

His Knighthood Photograph- 3 Intro peaks my interest for sounding a lot like “Alone, Stinking, Unafraid,” off the Ask Them EP, but the rest sounds more like a hum-drum tune from Earthquake Glue.

Face Down- 2  Slow, go nowhere, clean-guitar confessional held together with the effortless, uninspired ting of the ride cymbal. By the time it gets going, it’s already over.

We All Got Out (of the Army)- 3  Multi-sectional song here. First half is seemingly random accents as Pollard sings of what sounds like an throwback hippie-era tunesmith anthem. Second half, much better. Jelled, heavy, with some well placed vocal melodies save it.

Faster to Babylon- 2  String-swelled, acoustic ranter. Lifeless closer, after the ambitious and moderately successful penultimate track.  A slow crawl to somewhere perhaps, but no fucking Babylon.