Lexo and the Leapers
Ask Them EP
(1999, Fading Captain Series) 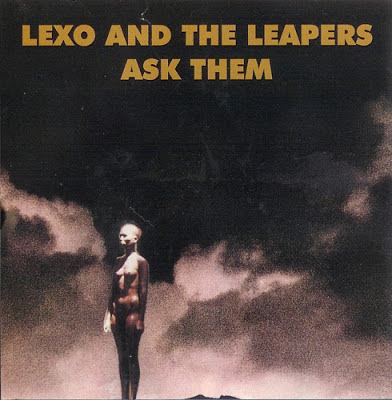 This one-off side project remains the only release by the Robert Pollard led Lexo and the Leapers. The band was fronted by Pollard with Dayton, OH's The Tasties as his backing band.  The EP is a fairly solid package of GBV style rock, with Pollard still riding the seemingly endless wave of his highly revered '90s output. Two songs here would later appear on GBV releases in different forms, or were played live at GBV shows for years to come.

Also of some possible interest to those taking notes, the EP was released the same day as Nightwalker's In Shop We Build Electric Chairs: Professional Music by Nightwalker 1984-1993. What does it all mean? I dont' know but it has something to do with being prolific, I think.


Side A:
Time Machines- 5 Would later appear as a GBV track on disc 4 of the Suitcase box-set in early demo form. Absolutely great song. High leg kicks abound for sure. Powerful, overtly catchy. Razor, buzz guitars can cut ears in some media listening capacities, and it fucking rules. Short and sweet.

Alone, Stinking, and Unafraid- 5 Acoustic intro into spoken word. Erupts into anthemic sonic blast with bellowed, top-of-the-word vocals.  Basement anthem to snub out your own pathetic basement anthem. “This time the world did, what it told me it would”  This shit is golden.

Plainskin-  3 Repetitive, mood piece with steady dynamic, and streamlined Pollard vocals. Sounds like a outtake from Not In My Airforce.

Side B:
Will You Show Me Your Gold-  4  Slow anthem, arena downer. A helping of acid washed riffs with a side of stoner rock washed down with big bellowing hooks.


Circling Motorhead Mountain- 3   Fairly run of the mill song. Attitude with no real delivery, dynamic, or climax. Comparably, a weak closer to a killer EP.
Posted by Eric Truchan at 12:18 AM