In Shop We Build Electric Chairs: Professional Music by Nightwalker 1984-1993 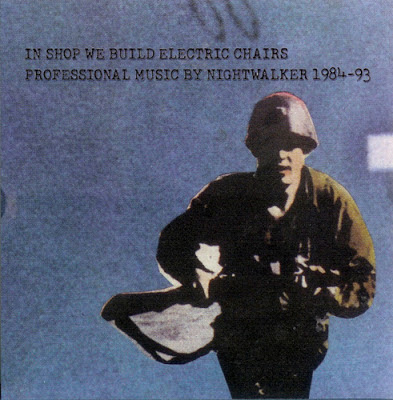 The 3rd release of Pollard's Fading Captain Series in 1999, the Nightwalker LP is a mysterious and baffling foray into lonely, late night, noise rock recordings.  Prior to this, the Nightwalker side-project name had sprung up on a few scant releases.  This, the full LP collection, was billed as "Bloomington's most cryptic collective."  Don't be fooled.  It is Robert Pollard and friends moaning into recording devices and recording feedback. It was also apparent around the time of release, the Fading Captain Series, in its infancy, was capable of putting out pretty much anything. Also, following in the Nightwalker tradition, no liner notes or any sort were included with the record. What you see is what you get.

Additional tidbit of interest, this collection, cataloged as number 3 in the Fading Captin Series, was released the same day as the Lexo and the Leapers EP Ask Them.


Side A:
Drum Solo- 2  Pretty much what the title implies. Sludgy beat on attuned drums for a minute with chanting sound effects swelling in. OOOOOOOkkkkkk.

Kenneth Ray- 1 Screeching guitar noise with atonal drum hits popping in and out. Total bullshit no matter how you slice it.

Amazed- 2 Casio bleeps and guitar strums while Pollard waxes philosophical on a general level of weirdness and indulgence. No wave Casio horror.

Ceramic Cock Einstein- 3  Moody, horror music that builds on suspense and unrestrained longing for something dark and distant. Not much of a song in any sense. Just 6 plus minutes of eerie noises, distorted vocal screed, and bassy guitar strums.

Side B:
U235- 1 Acoustic strums and a recorder playing random notes before being cut short. Not much of anything here.

Weird Rivers and Sapphire Sun­- 2  Impending doom hanging on the delicate edge of a repetitive bassline about to fall into the depths of disparity.

Trashed Canned Goods- 3 Meandering guitar line played over steady pop bass riff, and warbled Pollard pop harmonies. Underneath the muck, it’s essential a decent pop track. Still, it gets dragged through the mud of destruction that is the lo-fi Nightwalker universe.

Those Little Bastards Will Bite-  4  Epic proportions abound to close out this odd smattering of recordings. This sucker clocks in at just over 11 minutes!  No wave, nightmare noise. Sounds like early Swans recordings or lo-fi Throbbing Gristle noodling.  Certainly distressing mood music. If you’re seeking a well formed pop track, this as far left of center as you can get. Equally haunting and daunting. Essentially the track that can be used to define whatever nightmare realm Nightwalker resides in.
Posted by Eric Truchan at 3:37 PM