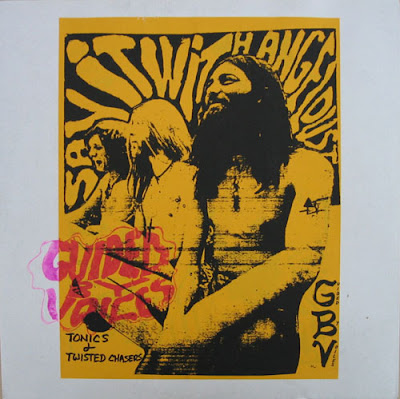 Sold through Rockathon, when Pete Jamison was still running it.
Pete posted to PB to announce their availability, and listed the color and pressing count info. Ordering instructions were included, and list of specifying colors, but required alternates to be listed as well. Members were limited to two LPs a piece. The instruction gave the option.

This LP was a fan club only release, and was initially available for purchase exclusively online. The LP contains 19 songs written and recorded solely by Robert Pollard and Tobin Sprout. The limited album was later reissued in 1997 on Rockathon Records with 5 additional tracks, which are also reviewed below.

Side A:
Satellite- 3  A shoe-string, psychedelic folk opener.  Out of tune, razor thin guitars drunkenly pluck away with a simple, dreamlike Pollard hook.

Is She Ever- 3  Sad, little acoustic strummer with Pollard crooning over Sprout plucked chords.

My Thoughts are a Gas (Fucked Up Version)-  1  Indeed the fucked up version. Precursor to a lot of the buried nonsense that would eventually frequent Pollard's future solo records.

Knock ‘em Flying- 3  The demo version of what would later appear on Mag Earwhig!  Awkwardly constructed, but more effectively stripped down.  This version is more satisfying than the future LP release.

Top Chick Silver Chord- 2  Eerie and downtrodden tune, but far from memorable. More like a bronze track than silver.

Key Losers- 5  Despite the title, this is one of the highlights of this record. An acoustic track, with big, sad as hell choral bellows. A weepy sing-a-long. Grab a beer for this one.

Wingtip Repair- 2  Nonsensical piano jam with some vocals sprinkled carelessly in for good, or poor measure.

At the Farms- 3 Slow, nostalgic basement ballad. Sounds a bit like something off the first Airport 5 record (Tobin and Bob)

Side B:
Unbaited Vicar of Scorched Earth- 3  The return of the REM influence is present here, as indicated in the instrumental first minute. The second minute finds Pollard crooning hypnotic, but decent melodies over said REM jangles.

Maxwell Jump- 2 One of the harshest recordings since,well, almost all of Vampire on Titus. The song is also kind of a forgettable short snippet. Deadpan vocal melodies bring a close to the song after muted guitar and vocals string it along.

The Stir-Crazy Pornographer- 4  Strung-out and deeply depressing, but of course in a nonsensical lyrical kind of way. Song sounds like it’s waking up from...

Universal Nurse Finger- 1  Pointless piano track with nasal, high-to-the-sky British Pollard vocal.
Sadness to the End- 2 One of Tobin Sprout’s most disappointing songs. Singing out of key in Pollard's signature style as he strums a guitar with kind of reckless abandon. One of the most slap-dashed Sprout GBV contributions.

Reptilian Beauty Secrets- 3 What ended the LP is a fitting, industrial tinged nightmare of a song. Machinery noises akin to a David Lynch soundtrack blow steam in the background while a distorted Pollard repeats “over and out” as if it were a desperate plea through a transistor.

CD Reissue tracks:
Long as the Block is Black- 2 A completely depressing and down trodden song with electric guitar squeals arranged over eerie acoustic swirls.

The Kite Surfer- 2  Not really worth hearing, lo-fi electric strums with an out of tune Pollard warbling over said chords, for unfortunately a little too long. Difficult feat when considering this baby is under 2 minutes in length.

Girl From the Sun- 4  An early sketch of  “Do the Collapse.”  Rough, buzzing, dead drum hits, and spacey British, urgent vocal harmonies.


The Candyland Riots- 3 Tick-tocking guitar plucks eerily ring out while Pollard croons some sad drivel over them. Not one for the mix-tape but intimate and ultimately intriguing. If Pollard had hijacked an early Sebadoh tape and sang some tear-inducing harmony over it, this song would the result.
Posted by Eric Truchan at 9:56 PM