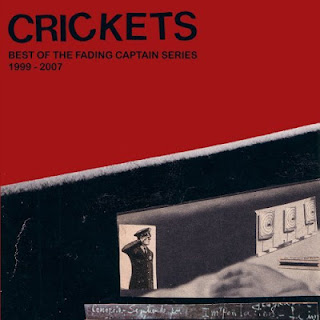 Crickets was a compilation of Pollard bands and side-project cuts from releases on his Fading Captin Series label. This collection was released as the final offering from the label in 2007; the 44th release on the label, spanning eight years. The double disc collection was available on CD only, containing 56 tracks (seven of those were previously unreleased, and exclusive to the Crickets collection).

The following are the two listed Guided by Voices unreleased tracks. "The Power of Suck" is listed on the back as being performed by Radiation Feeder.

Sister I Need Wine [Cromag demo]- 3   Demo of the same track found on Isolation Drills. This is a harrowing acoustic version. Moody and fairly potent.

The Power of Suck- 2  Listed as being performed by Radiation Feeder on the CD, this is a noisy, guitar crunched song. The bass plops and flops away. Judging by the recording and Pollards voice, it sounds like a Self-Inflicted.. or Same Place… era outtake. Noisy filler, with repetitive outro.  ALSO, *this song also tries to pass itself off as "Axtual Sectivity" on the 10 disc of the Suitcase box set, with a slightly different mix. Don't be fooled.