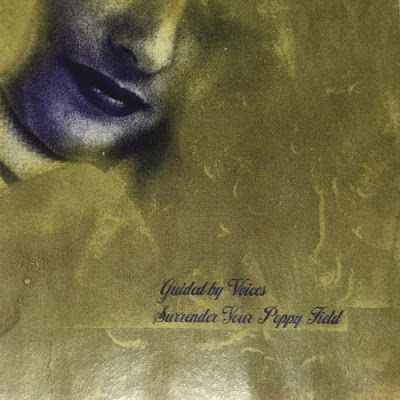 Robert Pollard is well known in his circle of fans as the King of the 4 P’s. Whether by pop hooks, punk ethos, psych spirit, or prog leanings, Pollard has made a career by careening from style to style, ingesting the entire history of rock, and redistributing to the world through his own eyes. It’s with his vast knowledge and appreciation of the subject that makes his own output so tantalizingly kaleidoscopic. With this in mind, we find Pollard and his refreshed band of brothers taking broad strokes on the open canvas that is Surrender Your Poppy Field.


On the 7th re-reunion LP finds Pollard’s tightest line-up on full display, running through a gamut of styles and concepts. Each song feels different from  the next. The chord progressions are unwieldy at times. Pollard goes full on experimental vocals throughout, sometimes bellowing with the best of his run, other times bending his voice into new and less charted territory. Even the audio quality jumps from track to track in a way that's wholly refreshing compared to recent GBV LPs. Sometimes all of these things happen in the exact same song!

Surrender Your Poppy Field feels like the most fun this group has had constructing a record to date. One can imagine Pollard giving a half finished demo tape to the band with nearly illegible scribbled notes, instructing them to run wild. This also applies tenfold for stalwart engineer Travis Harrison, producing some of the most profound and eyebrow raising moments of his tenure with Pollard. Everyone involved sounds like they're having the times of their lives-and it's all captured on tape.

While Poppy Field is at times immediate, there are moments that beg for revisits, again, sometimes within the parameters of the same song. It is a moody album, flailing wildly with reckless abandon. There are swings and misses scattered about, but when it hits, it hits hard. A bold and exciting record 34 years into the universe of Pollard recordings.

SIDE A:
Year of the Hard Hitter- 5 What happens when Bob Pollard sends his most scatterbrained demo recording to the band to figure out? They come up with this patchwork of 4 minute nonsense that somehow turns out to be one of the coolest GBV songs in the catalog thanks to its sheer massiveness alone. Is this a clusterfuck or actual genius? Constructed of nearly a dozen parts, this opener is an unwieldy gem of no-fi, psych, doom metal, sheer pop, all complete with unnecessarily long guitar bridge, and fireworks worthy guitar solos. A dizzying exhibition, and one wallop of an opener, not necessarily for the faint of heart.

Volcano- 4 The greatest '90s song GBV never wrote. Sounding unnervingly unlike GBV and instead resembles an incredible slew of college slack rock hits you can almost put your finger on. Shoegazy, lush, impactful, complete with beautiful Bob melodies. However, misses the classic mark for almost being too... derivative?

Queen Parking Lot- 4 After throwing back to other alt/indie 90s bands, Pollard throws it back to some simplistic glory day GBV territory with this short pop laden tune. Warbles about in mid-fi range, Pollard crushing it vocally. One of the sunniest spots on the record, that hooks with ease.

Arthur Has Business Elsewhere- 5 A grand sweeping gesture from Pollard and gang ready to knock you on your heels. Meanwhile, revel in the potent production by Travis Harrison, some of his strongest work put to record yet.  Uncle Bob is in waltz mode, calliope bopping eerily about. Is this a circus fever dream we're stuck in? Empowering, triumphant. Play it loud.

Cul-De-Sac Kids- 2 A song with so much potential. Starts off brittle and reflective before kicking into mid-tempo, fairly standard Pollard 70's rock. However, the cheesy lyrics and vocal choice from Pollard make this more thorn in side than an actual winner. Is he mocking the lyrical stylings of Craig Finn? Does he sing with an intentional lisp at one point? Hearing "boy those 'sac kids throw good parties" makes my skin crawl just a tad. So many questions to a song with such a gorgeous start and outro.
Cat Beats a Drum- 3 Speaking of intros, what an incredible one to this song! However, this song is only stuck in intro mode. A two minute run that starts and never really gets anywhere, though that's not necessarily a bad thing.  Minimalist incidental indie music. Uncle Bob goes for some strange vocal stylings on this as well. However, as a whole, it's perfectly meditative, carried by Gillard's prickly descending guitar line that it fits unobtrusively in the back pocket of your brain.

Windjammer- 3 This is the product of trying to squeeze The Who's entire discography into a 3 minute song. "Windjammer" is a dizzying mash-up of pop buried under Townsend strumming and Moon-like drum bashing, all mixed in a mid to lo-fi disorienting fashion. A grower that sometimes feels like a breathtaking headache. Pollard may have just invented kitchen-sink pop with this one.

SIDE B:
Steely Dodger- 2 Moody, mysterious; a somewhat weak opener to side B, although intriguing. This song snakes along like a low hanging cloud. Grimy and subtly hooky, it occasionally begs for a revisit. Unsettling ground all around.

Stone Cold Moron- 2 My new favorite Circus Devils' song. I refuse to believe Todd Tobias isn't manning these instruments. Complete with Pollard-the-cop voiceover at the end, this screams like a leftover track from Stomping Grounds. A mildly irritating stoner metal jam where Pollard gets to flash some classic constipated vocal intonations. It also has strong potential to get stuck in your head for unknown reasons, so it's got that going for it.

Physician- 4 A pop gem that continues to get better with every listen. Dynamically, it rides the same wave length for a somewhat lengthy 3:38. But the song is so incredibly solid, from the blatant to its sneakier hooks. Gillard lights the fuse for another signature smoldering solo. One of the stronger tracks of the record.

Man Called Blunder- 3 The second single of the LP, "Man Called Blunder" is a simplistic three chord basher. Pollard shines vocally, pushing through this song like a double tracked bulldozer. Unfortunately, in an LP full of sudden surprises, this one feels almost too safe for its own good.

Woah Nelly- 4  What happens when Tom Waits meets Magnetic Fields? This haunting minute long tune sounds like it's projected from a busted gramophone in a cemetery. A haunted lullabye of sorts. Also, it's a "cover" of a song Pollard previously released on Lithuania Bombshell 7'' under the ESP Ohio name in 2016. It was great then, but it may be even better now.

Andre the Hawk- 1 With a name like "Andre the Hawk," you could almost smell this stinker coming from a mile away. A downer of a waltz, this song is almost 2 minutes of a lifeless blank canvas with some fairly crummy lyrics as the finishing touch. Pollard's strong vocal performance goes nowhere on this gray blob tacked on at the tail end of the record.

Always Gone- 5  What's this? After dozing off to the "Andre.." get ready to get a jolt with this minute plus GBV classic-lineup type rev up.  Could've been an UTBUTS outtake! Sunny nostalgia wrapped in a perfect minute and a half. Pure Pollardian gold.

Next Sea Level- 3 And now after you've woken up with "Almost Gone," drift back to sleep with one of Pollar'ds most go-nowhere songs in a while. Reminiscent of something off Circus Devils' Five LP. Pulsing bass tones lead us in for over a minute before switching to half-assed 2 chord rock. BUT WAIT... this closer is so trancelike that after a few deep listens, this one begins to sink its teeth in. One of the most simplistic of all GBV songs, it's an eerie and fitting end as we float back out again into the unease of these modern times.