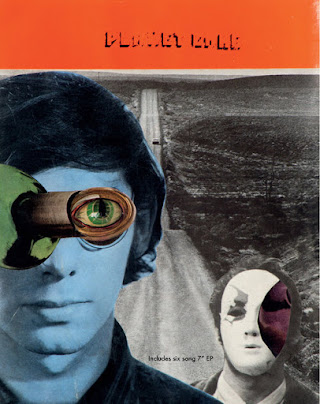 The second EAT installment in Robert Pollard's solo catalog, here is another collection of "never needed to be released, but happy to have another 7" on my shelf" record from the master. Like it's predecessor, Eat 15's (Dislodge) The Immortal Orangemen 7" this finds Pollard alone on his boombox, hammering out musical accompanying pieces to his collage work in the beautiful layout of his literary book, Eat 16.

To be owned for the 237 pages of artwork WAY more than the record, I'll take another piece of Pollard wax for the turntable. Unfortunately, it's another non-essential piece of collector fun that keeps the diehards, myself included, foaming at the mouth. Oh to have another Pollard solo LP one day...

Strange Angels- 2 Here, Pollard fumbles around with a couple of strings before going off into a down stroking rumble on a detuned chord (string?) while speak singing.

They Don't Play the Drums Anymore- 3 Hey, is that some drumming on the acoustic guitar I hear? Pollard expands his horizons. This actually has a fairly strong melodic Pollardian bellow to it. Hey, sign me up.

Good Luck To Ya Mutha- 1 Nothing to see here folks. Pollard thinks it up while being recorded. On to the next side.

When Growing Was Simple- 3 A variation of "A Salty Salute"? The one's a haunter. Feeling like it might have some purpose at first, it eventually goes off into stream of conscious with some pretty decent surrealist lyrics.

Game Cocks- 2 The poppiest of the tunes here, it's features some trademark uncle Bob scatting at the end.

Blogs on Toadstools- 1 Spoken word piece ending with warbled voiced Pollard sounding almost prophetic. Being that he's released not 1 but 2 comedy records, I'd buy a spoken word/poetry LP from him at this point.

Bonus Track- 1 Pollard fiddles around with a toy flute/recorder for about 10 seconds. Not a song, even a little bit but so be it.