Do Not Try To Adjust Your Set I Am The Horizontal And The Vertical
(2018, Imaginary Man Records) 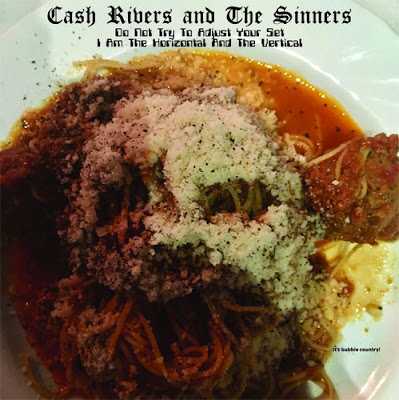 What in the world am I doing here, holding this double gatefold record on my lap? How in God's name could Robert Pollard let this happen? In a world where fans clamor for a Boston Spaceships reunion, a Mars Classroom LP repressing, and would welcome more than just ONE GBV LP in 2018, comes the double LP no one asked for.

Yes, a true Pollard fan who has hung by his every hook and note released to the public may still be shaking their heads in disbelief. If you still haven't gotten over the sound of your wallet screaming at you as you ordered the SECOND full length LP from Cash Rivers and the Sinners, don't worry... you're not the only one.

What started as a bad, yet mildly amusing joke, has gotten WAY out of hand. The 17 song 7'' debut from Pollard (under the guise of foulmouthed, Cash Rivers), provided some laughs in the grooves of said novelty record. However, things got dire in early 2018 with the 23 song, 22 minute full-length, Blue Balls Lincoln. The chuckles to be had throughout the country meets locker-room-fart-jokes record were few and far between. It felt like a slog! The fact that only 500 were pressed, and now stands as one of the most expensive pieces of out-of-print Pollard wax to date, only makes it more painful.

But fans fear not! For Cash Rivers and the Sinners are back to help you get your yucks on! At 69 songs (hehe) spread over 2 LPs, the sheer magnitude of the whole affair feels as disgusting as that spaghetti massacre of a record cover. BUT… lo and behold… against all odds, this somehow shines as a fascinating, trippy novelty record of unrivaled ambition! Is this to say Do Not Try To Adjust Your Set… is new classic in the Pollard cannon? Far from it in the traditional sense. However, this tome of ideas runs the gamut from blue humor to the exceptionally bizarre. It’s so disgustingly rich with throwaway ideas, it has the power to make one sick with glee.

Much like, say Alien Lanes, the whole piece should be heard in one sitting. When viewed on a track by track basis, as this review site does, it might feel a little painful. Still, Pollard and friends have created one weird, drunken, often funny canvas to be studied (possibly with earplugs and a Hazmat suit). Also, the record sounds unnervingly good!

This is what happens when a joke goes too far. Are we better for it? The jury is still out on this.

Just prior to release of Do Not Try to Adjust... Pollard has said this is the end of Cash Rivers. With news like that one can give thanks, and perhaps shed a sad tear simultaneously.

SIDE A:
Intro- 2 Welp! Here we go. Maybe not as riveting as Pollard singing the "ABC's" to open up She Laughed I Left. Simply 8 seconds of Pollard getting his Dayton drawl on while introducing the record. Can I even rate this? Sure, I just did. A fucking 2.

Children Of The Popcorn- 4 Piano driven minute long rock track while Pollard sings in a helium wheeze. Oh crap, this is catchy, and hot damn this sounds pretty great. The kids chanting at the end seals the deal.

Cheap Truck- 3 A real country rocker that builds slow. Pollard (I mean, Cash), does some spoken word type, creep-o stuff over it before belting it out toward the end. Sure, why not.

My Jagwire- 3 The first of several surf, rockabilly styled songs on the record. Is this good? I don't know anything anymore. Only 66 tracks left to go. This review will be my War and Peace by the time it’s over.

We Gotta Go- 4 So pretty, and simplistic, it could've been a GBV song if Pollard put some real lyrics over it (rather than singing about grabbing a pizza). In fact, GBV DID play this song at their shows in the fall of 2018. Well done!

Object In Motion- 3 The first of several songs in which ol' Cash sings some of Sir Isaac Newton’s scientific Laws of Motion. See kids, you didn't realize you were also learning while listening!

I Wouldn't- 4 A toe-tapping, piano backed track. This is pure quality! Must be nice to produce this type of listenable 5-star horseshit so effortlessly. The horseshit is 5 stars, not quite the song. Almost… Also, kudos to engineer Travis Harrison for signing up for this project, and making something so tossed off sound like a radio hit of yesteryear.

Slide On Sloopy- 1 A cell-phone type recording looped over a Casio keyboard type backing track. One of the stupidest things of all-time. Alrighty.

Take Her Home, Tuck Her In And Go Back Out- 4 True country joy beaming from this one. Stomp your shit-kickers on the boards and sing the seemingly never-ending choruses. Wonderful harmonies. Killer banjo solo in the middle to boot!

Bubble Country TV Spot- 2 Spoken word nonsense about Pop-Rocks type candy. I do not know why I am laughing, but I am.

Soda Pop- 3 Bouncy, simplistic tune with a psych guitar solo over garage stomp about soda pop being worse for one than beer! Hey, "it kills you faster than beer." The "it does!" at the end is worth a laugh.

She's Too Big To Be My Baby- 3 A country fried shuffle played with conviction and some nice fiddle and piano ticklin'.

She Discoed Out The Door- 3 Oh you bet if this has"disco" in the title, you're gonna get a Disco backbeat from crotchety ol’ Cash. Disco meets country, only the way Cash Rivers could provide. Also, brings to mind some late ‘70s Sparks.

Rock And Roll Keeps You Alive- 1 Can I type nothing here? Damn, already typed.

My Heart's Still Beating- 4 Angelo Badalamenti Twin Peaks feel to this one. So cold, oddly enjoyable.

SIDE B:
He Lives Upstairs- 3 Weepy, rainy day country slog. Would've fit nicely on the debut Cash Rivers 7''. No harm, no fouls on this track.

Crispy Old Crackhead- 5 Busted a gut over this one. Maybe you'll hate it? Which should just be the review for the entire record.

Robot Arms- 2 If you like grunting, musical fart noises, and bullshit programmed loops, get in on "Robot Arms"  If not, it's over before it starts.

There's No Such Thing As Global Warming- 3 Psych acid bliss as Pollard reaches in deep and pulls this out of his ass, sounding like a snippet of a Beatles outtake.

Lyin' M F- 1 Ok, this is ridiculous... and pointless. Just got dumber for listening to this.

It's Only Rock And Roll- 1 Ok, now me dumber den ever. Cash Rivers "covers" The Rolling Stones only the way Cash Rivers can... poorly.

O Brother You're Out There- 3 Perfect little country nugget, but average at best.

Honky Tonk Bebop Lover- 2 Piano bopping with Pollard scats some nonsense. The song ends with Pollard saying "Whatever. Fuck it." Perhaps the credo of the entire DOUBLE LP!!!

T V's Got A Lot Of Things On His Mind-3 Finally, super fan and GBV brethren Trader Vic gets a song dedicated to him in the cannon. Pollard sings in his weasely voice. 100% irritating, and funny as hell.

Blinding A Leprechaun- 4 It's like they always say; Sometimes you're mocking a Chihuahua, sometimes you're blinding a leprechaun... WHAT!? Where am I?... not even half way done with this record, that’s where! Pollard does some low-rent LCD Soundsystem stuff. Actually sounds a bit like mid-90s The Fall in spots. Have I used the word "ridiculous" in this review yet? Perhaps, not enough!

Bobby Bare Promo- No ProbLimo- 1 Bobby Bare returns for his own "radio spot." I want this to be funny, but it's just not.

SIDE C:
Corn Country- 3 At 2:49, this is practically a fucking EPIC. Fortunately, it's almost a real song, nearly catchy, but falls short. It's so unfunny, so UNserious in its approach, and SO utterly ridiculous I find myself wearing a shit-eatin' grin throughout at this pile of corn.

What Goes Up- 2 The second installment in Pollard's "Newton's Laws" songs. Almost a GBV jangle approach taken during this ridiculously stupid song. Somehow, this is catchy.

Warning- 1 Spoken word track warning men with lesser than exceptional endowment to turn away as Pollard spills into...

Tiny Cocka- 3 "TINY TINY COCKA!"  The goddamn dumbest thing I have ever heard in my life. The trumpet at the end really makes it, though! It's the little things, y'know.

Marathon Penis Go- 4 Yes, there is finally a song in the universe with this title, and yet another song about male genatalia. Finally. Hope it was worth the wait. Well, I busted a gut listening to this one. Now THIS is the dumbest thing I've ever heard. That banter at the end though... HAHA!

9 Kids By 8 Different Women- 2 A pretty little ditty reminiscent of the original 7". Over before ya know it.

Voodoo Lady- 2 No, sorry. This isn't a Ween cover. Speaking of Ween, any of these titles on this record could be a Ween song. In fact, this isn't that far off from a Ween song... Zero thought, mildly infectious.

Honolulu Titties- 1 Brainless surf track... for full lyrics, read the title (just like many of these songs!)

Winona On The Rider- 2 A piss poor pun sung over gloomy country noodling.

Tiny Cocka 1- 2 Ahh, the RETURN of Tiny Cocka. Thank Goodness. Doesn't deliver the same way the original "Tiny Cocka" did. More of "Tiny Cocka" by way of Magnetic Fields. Beautiful, in a way.

The Hair- 3 Real moronic school boy stuff here that made me chuckle.

Ready For A Sitdown- 3 A toe tapping, impressive guitar shuffle. :28 seconds of bliss.

Did You Hear Me Have To Say I Love You To A Man?- 3 Nice, sterile country twang to this one! Some real honey in Pollard's voice on this one!

You Know You Said Woah- 1 Worthless, except for those avant sax rips. Far too long for anyones good.

Fifth Village Man- 1 Insanely forgettable. One of the most blatant throwaways on the record.

We Party Hard- 2 Pollard sings like he's helping a buddy move into a second floor apartment while under a nagging hernia. "We party hard, and then we get soft!" The new rock motto.

For Every Action- 2 Forgettable, mildly hooky. Yes, another one of Newton's Laws for you scholars in the making.

Party Pooper- 2 Could've been something off one of the Suitcase collections, which is a sad indictment on some of them Suitcase box sets!

Eddie Spaghetti- 2 Kept waiting for this one to get clever... It doesn't. Still, I find myself laughing.

Shit All Over The Place- 4 Finally, a song for the feces fans out there! The most metal song of the collection!!! Rock lives!... complete with wet fart noises. Thank you, Robert Pollard.

John Shut Up- 2 Mindless doo-wop on a budget tune.

Bubble Country 2- 1 Spoken word nonsense. I'm laughing, and I don't know why? I've lost my mind, and things will never be the same.

2 O'Clock In The Morning And I'm Still Rockin'- 2 At 2 minutes, we've got ourselves a real song here! Unfortunately, this Billy-Ray-Cyrus-fallen-on-hard-times song is 2 minutes long. Ran out of ideas during the first 10 seconds. However, that stadium chant at the end is PRICELESS.

Newton's Laws- 3 Finally, collected on one 44 second track, we get a compilation of all the Cash Rivers "Newton's Laws" tracks from the record. Also features some hall-of-fame noise in the mx, such as farts, mooing cows, and the opening towel dispenser noise from Space Gun.

You Know We Get Happy When The Sun Goes Down- 5 Oh DAMNNN! Didn't know this thing contained Sandinista outtakes! 3 minutes of pure dub, filtered through the demented hangover world of Cash Rivers and the Sinners. Perfect closer!


Excuse me while I go soak my brain in some Epsom salt.