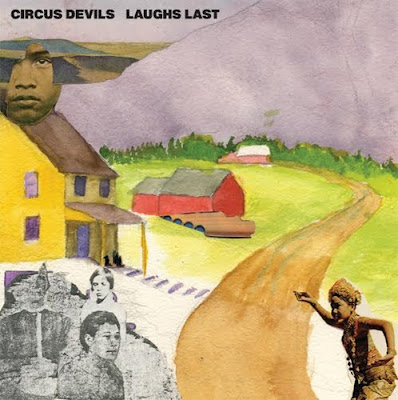 To think it has actually happened. The horror is over.... After 16 years, Pollard, along with brothers Todd and Tim Tobias have pulled the plug on the nightmare machine known as Circus Devils. Yes, Laughs Last was announced as the official swan song recordings to cap an impressive collaborative career of studio blasphemy and art damaged experimentation.

Circus Devils has always been Pollard and the Tobias' brothers playground to cut loose, experimenting with lyrics, instrumentation, recording techniques, and even short films (the DIY, art school project- esque videos are sometimes downright chilling). However, all strange things must come to an end. On Laughs Last, the boys really let all the colors fly: the brazen, the noise damaged, the depression, the hooky, and the epeleptic bouts of schizo-pop-phrenic dysphonia. The record really does offer up all styles of Circus Devils. In some ways, it feels like a stripped down version of Sgt. Disco. Another analysis could also feel like, "ehh, maybe it's just some ideas leftover." At any rate, it's a fairly solid sendoff, mixed with a few new day classics to boot.

Recorded by Todd Tobias in Dayton, Pollard did the vocals with the help of ex-Ricked Wicky/GBV guitarist Nick Mitchell. The LP was also released the same day as the 30 track "BEST OF" collection Laughs Best (featuring a bonus DVD of Circus Devils videos... not to be missed).  Gone but not forgotten, take your final leap into the murky aural pond of Circus Devils and see what hallucinations you can drown in.  Farewell.

SIDE A:
Get Out of My Way When I'm In Town- 3 A wholly familiar, nearly gratingly simple melody through the verses. The choruses go big on this, sounding like it'd fit comfortably as a darker GBV track.  Pollard mostly repeats the title a bunch of times, as he does on many a Circus Devils tune. The rest is held together by a loose mid-tempo drum beat, some dismal guitar hits, and nauseatingly high-pitched ping-ponging effects. Off to the final races with Circus Devils.

Philosophy Bag- 4 Punctuated guitar lines hold this down amid a wave of blips and swirling amplified electricity in the background. Also, let's not forget about that cowbell now! Downright nightmarish toward the end in its repetition. Music appropriate for a sacrificial ritual, perhaps... but don't take my word for it as I'm a novice in the ritual game.

ZX35 POW- 1 Did the Tobias brothers forget the utilize the other instruments at their disposal? A straight crap guitar track fumbled to some nonsense pattern while Pollard speak-shouts some drivel. Almost slightly interesting in its simplicity, but lyrics like "Circus Devils love you" and "now you're having fun. Circus Devils fun," sucks the soul right out of the air.

Teenage Rooster- 4 Another nauseatingly repetitious song, one that's to die for based on its guitar chug, heavy hitting drum stomp and fuzz organ. It feels at any minute Mark E. Smith could pop in and declare this a later period The Fall song that got away. The instrumental groove hooks you, as Pollard bellows away in the background. Post-punk for an exorcism.

Alice Cooper Alarm Clock- 1 Cool title for what it achieves. However, this is strictly a fart and you'll miss it gap track of guitar noise that is seemingly broadcasted from a cheap radio. Oh there's an organ that plays a downer melody in there to. Necessary? Maybe. As a song, you get nada. Bleeds into...

End of the World Ice Cream- 3 Stomping drums open this up, and it practically feels like we're in for some standard minor-chord rock. However, the drawling organ ensures we're into dipping into prog territory as Pollard delivers a strong vocal showing on the verses, but the hook in the chorus is a little "mehhhh."

Do the Nixon- 5 Alright, you don't have to be a damn Pollard scholar to identify this as the immediate  hit of the LP. Circus Devils like to do this every so often, putting a downright pop-tastic track right in the middle of the chaos. Very likely could be on any Pollard solo album recorded with Tobias. From the guitar jangle, to the upwardly mobile guitar jabs, followed by Pollard's humorous, cleverly referential lyrics and simplistic hook it fires on all cylinders. It all feels so elementary, but goddamn triumphantly rewarding. AND at just under 2 minutes.

Smoke Machine- 5 After wallowing in damn near hip-shaking material, we dive headfirst right down downer alley. The verses feel comparable to some of the gloomier material off Please Be Honest, however, the chorus really pushes us into a fuzzed out '80s college rocker of sorts. The hooks are dark, yet powerful. Might miss the brilliance the first time around, but this one's a mini epic anthem of genius worth repeated revists.

Time Trapper- 3 Dusty, lonesome acoustic picking over ethereal keys. Pollard sounds fragile, cold even. Like walking peacefully through a bad dream. The whole thing teeters on the edge of depression, while remaining mystical and cryptic. Folk-prog to freeze to death by.

SIDE B:
Crucified By the British Press- 1 oooof. Fuck what I think, but this whole track's phoned in. From the left-over music, to the quality of the recording, to Pollard's corny lyrics and vocal styling. The vocals don't fit with the wimpy Tobias production throughout. And what's this song even about? A real, or maybe fake rock band, getting bad press? Don't know where this song fits in the Pollard cannon, other than maybe Suitcase, but I guess Circus Devils is a good place to dump it? So "normal," it's head scratching.

Mr. Detail's Explanation- 4 Lo-fi guitar fuzz in one speaker, brittle melodic chords in the other. The song, once it gets going, is straight melodic, layered vocal declarative ear candy. Pollard sounds strong, delivering what feels like a lost track from a '90s GBV EP, say, Sunfish Holy Breakfast.

Farm Action- 2 Sounds like an outtake from their previous LP Stomping Grounds. Another normal tune here. Has the feeling of "Girl in Space," off previously mentioned LP. Musically, the whole affair is a straight yawn. Pollard gives a noble showing, but it's all a pretty hum-drum, mildly pretty tune amounting to little payoff any way you slice it.

Into Gear- 3 Schizophrenic piano loops about in the distance while jazzy percussion clangs its way around organ swells. Pollard speak-sings a repetitive tune in a reverb chamber, as if floating in space. A great one to hear in the dark. Beatnik cool meets one man's space odyssey.

Cockroach Whiskey- 4 Lonesome acoustic plucking, a real pensive tune as if off of the Escape LP. Pollard, appropriately, goes of the rails lyrically with untethered verse plucked from the stratosphere. It's like listening to one of his collages come to life. Mildly unsettling, with a quick assault on the ears kind of finish. Sad, strange, rewarding.

To Each His Zone (Sunshine Baby Butt)- 3 Alright. This title though? Just a slight wink and a nod to the lyrics "sunshine, baby but" in the chorus. It all feels like fairly adult contemporary. A far cry from Circus Devils' madness, as is most of this B-side. At first, this one plays out downright cheesy, but it's a well formed Pollard tune that needs time to settle in. Not breaking new ground here, but valiant effort nonetheless. This song does not rock.

Aerial Photographs From Alcatraz (Including 'Nightmare Parade')- 3 Oh yeah, here's a Circus Devils tune for ya'. Spoken word Pollard stylings over heavy metal guitar droning and a nervy bongo stampede. The second part of the track slinks in after Pollard announces "Nightmare Parade" and through a mystic, warped mini stretch we sit. Yes, it does indeed feel slightly nightmarish. Thanks fellas, but average fair.

Asteroid*- 4 So here we have it. We've come to the end. And what a perfectly beautiful ending it is. A simple two to three chord organ swelling track as Pollard sings it as if a eulogy, stating "the lights are burning out behind and ahead of me," and "dead cell material dissolving." Of course, this is all in relation to the song's narrator stating they are, in fact an "asteroid*." Ah, whatever the case, a perfect sendoff to a wrap up the daunting, maddening, beautifully eclectic catalog of Circus Devils. Farewell, on your cosmic journey through vomit, melody, dissonance, REM cycles, and space debris.