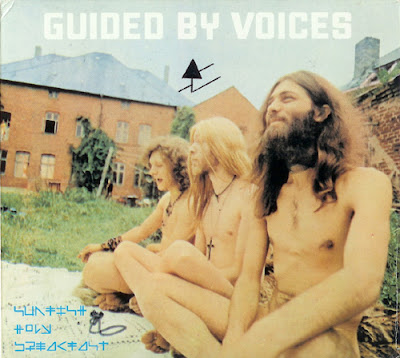 If not the music, Sunfish Holy Breakfast stands as a bench mark for the productivity and sheer audacity of the mid-90s, classic lineup Guided by Voices for one simple reason; this EP has 10 tracks!  Bands have done similar things before, and topped the track output of GBV in their own EPs, but the brash move helped cement GBV's status as an unhinged song factory. The EP released on a 12'' is unfortunately mostly average to weak with a few bright spots. This release also features the only writing contribution by short-term band member, and Spin Magazine Senior editor, Jim Greer.

The EP also features two songs that were previously released on earlier 7''s in 1993 via Anyway Records. Links to those records are provided in "Stabbing a Star" and "If We Wait."

SIDE A:
Jaberstroker- 3 Opening with the high-flying bravado that this era of GBV pulled off so well, a rain of claps and hoots open this 10 song EP.  “Jaberstroker” is a lone Tobin Sprout composition, played solely on guitar. Perfectly comforting guitar changes and intimate vocals stand as a great opener.

Stabbing a Star-  Same track that appeared on 1993's split 7'' compilation Out Of Cowntown Vol. 3 Check it out there.

Beekeeper Seeks Ruth- 4 Hell of a song title. Conjures up aural memories of “Wished I Was a Giant” sans ping-pong drums.  Hopeful melancholia. A comforting bedroom demo filled with sadness. Like a warm blanket made of tears.

Cocksoldiers and Their Postwar Stubble- 4  Mid-fi full band, slacker jam. Pollard and Sprout always had a penchant for throwing back to the '60s side of things. Here, GBV revels in full on '90s tradition, and a product of the indie times.

SIDE B:
A Contest- 3 Pop rock electric guitar and vocals. As infectious as the common cold, but it would be a great improvement to hear this with full band accompaniment.

If We Wait-  Same track that appeared on 1993 split 7" w/ Jenny Mae Leffel. Check it out there. Absolute classic.

Trendspotter Acrobat- 3 Jim Greer penned and performed song, his only one of the entire GBV cannon. Simple acoustic tune with melodies that remind me of something out of one of Yo La Tengo's more uptempo songs.

The Winter Cows- 2 Pretty drab and shrug-worthy acoustic song.  Not much of note on this demo track.

Heavy Metal Country- 4 Slow as syrup, somber yet tuneful track that's bound to kick up some piece of nostalgia of some sort from the nook of your brain. A lost, more subdued classic.