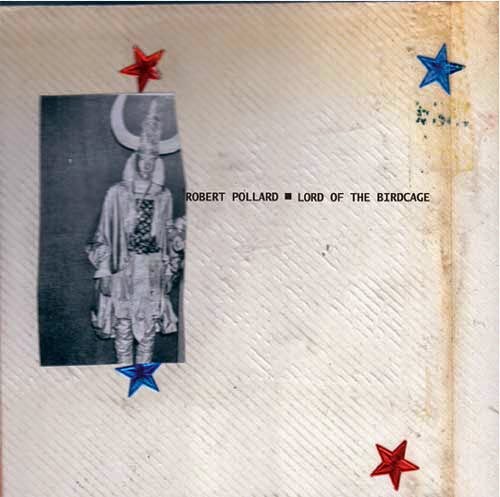 The 2nd solo LP of 2011, following Space City Kicks, Pollard returned later in the year with a decent, but somewhat forgettable follow-up. For this next act, Lord Of The Birdcage, Pollard reportedly took a different approach to his song writing.  The 12 tracks on the LP found their origins as poems which Pollard then constructed music around. An inserting approach, perhaps. Pollard, keepin' it fresh. Dropping the term "poems" repeatedly might give some out there Rollins-chills. No, Polalrd has not gone the way of a Jello Biafra box-set, and "poems" is not to imply Pollard does spoken-word under these. As a result of these "poems" with music fit around it, some phrasing and melodies seems rushed or crammed in at times. A plus to the whole outing, none of these songs are bottom of the barrel on this one. However, none really manage their claws into you on this easy-listening outing either.

Smashed Middle Finger- 3 Light and surreal for starters. Cozy niche of a song to shut yourself off with. Vocals sound strained during the opening section.  Song kicks into full on rock song, but plays out fairly awkwardly at times. Lyrics are terrible.

Garden Smarm- 3 Bouncy, and poppy-punk riff played safely by producer, Todd Tobias. Fairly toe-tapping. IN FACT, most toe-tapping one of the whole damn bunch, with decent lyrics.  Chorus is fairly flat, however.

You Can’t Challenge Forward Progress- 3 Mid-tempo, slowly swirling poetic warmness. Grab a cup of hot chocolate, drape an afghan over your lap, cause you're gettin' old, and listen to this guy.

In a Circle- 4 Waltzy-schmaltzy meditated grandeur.  Sounds pretty paltry and laughable, but as this 4 and half minute waltz dances out, it somehow becomes fairly addictive and saddening.  Pretty damned beautiful.

SIDE B:
You Sold Me Quickly-  2 Stuttering, start stopper that’s one for the plopper.  Here, Tobias mucks it up, Tobias-style. Not an enjoyable listen.

The Focus (Burning)- 2  If you’d pile drive yourself right into the meaning of “easy listening,” this would be the pile of pillows you’d plunge headfirst into. Nothing really happening here. Music seems to swell, and go away, and little piddle in. Pollard sing-talks his poetry throughout. Fade to white.

Silence Before Violence­- 2 Multi-sectioned detour of a song. Both rhythmically and lyrically sounds like an old European folk song. Explodes into mid-tempo, big rock. Pollard’s lost on his melodic search. Violin-sounding synths come in eventually. Fairly forgettable, and all over the place. But, remember kids. The title is good advice.