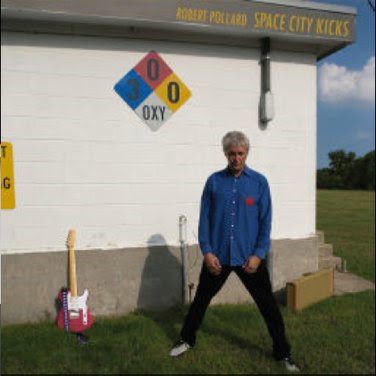 Following the drab, gray canvas of Moses On A Snail, Pollard entered 2011 with a new batch of solo offerings wrapped up as Space City Kicks. Packed with 18 tracks, the LP is a fully-loaded yet fast moving affair. Quite simply, it's one shifty outing, never comfortable in its own skin. But then again, such is the spirit of Pollard.

Recorded, once again, with Todd Tobias, the LP  has a Circus Devils feel to many of the songs, sans heavy-handed ambient drones and wind-up, thrift shop music boxes. Space City Kicks has a rather off-the-cuff prog feel to many of the arrangements; short demos that have received studio enhancements from Tobias, and plopped in our ears for a fairly strong, but cluttered Pollard LP.  Additional note, Pollard said all the song titles are taken from classic rock songs, that rearranged to form new ones.   Huh?  How 'bout that?


SIDE A:
Mr. Fantastic Must Die- 4 Uncharacteristic of Pollard’s solo work but pretty trippy and cool.  Sounds like something from The Ex more than The Byrds. Choruses are proggy and reverb slathered, while the verses are a post-punk shuffled mess. I dig it.

Space City Kicks- 3 2 part song. First part’s a somber repetitive rocker with hushed vocals. Trimmed of fat and amped-up on subtle attitude. Second half is pretty pointless guitar noodling over soundscapes, and ultimately kills some of the enjoyablity off the first part.

Blowing Like a Sunspot­- 3 Short song that sounds like the intro of something off Earthquake Glue-era GBV. Unsettling catchy at parts.

I Wanna Be Your Man in the Moon- 4 Airy, harmless tuneful pop. Nothing earth shattering but on an LP of this era, it’s fairly refreshing. The lyrics are so “normal” that they’re pretty lame.

Sex She Said- 1 Almost a pointlessly stupid as the title. Pretty much an excuse for Pollard to utter “Sex she said,” over weird noises.

One More Touch- 2 About as adult contemporary as Pollard can get. Song is an extremely easy listen, with some more frank and cringe-worthy vocals, uncharacteristic of Pollard with his bizarre imagery and word play. Fairly forgettable.

Picture a Star- 1 Complete weirdness. Pollard singing through muted vocal modulators, while instruments sound like their exploding as marching around a post-apocalyptic world. Not as cool as I just made it sound.

Follow a Loser- 3 Mid-tempo, heavy rocker with awkward progressions and melodies that fall flat. One for the b-side bin.

SIDE B:
Children Ships- 4 Harrowing, freakishly desperate sounding tune. Psychedelic madness meets prog-rock. Normally, I’m not crazy about stuff like this on Pollard solo-releases, but this is a pretty cool Circus Devils-esque tune. Why not?

Stay Away- 4  Light, double harmonies in the early to mid ‘60s vain, with slightly amped up music also reminiscent of that era. Great short track.

Into It- 3  Easy-listening confessional song on crisp acoustic with light percussion.  Easy to get behind. Hard to completely discard.

Tired Life-  4  Big hooks on a song that sounds like it’s at a stumbling, slow pace.  Plods along with the fairly flaccid musical ideas, but somehow gets stuck in the brain.

Touch Me in the Right Place at the Right Time- 3  Essentially just the title repeated over and over in a saccharine stained, catchy, breezy pop syrup. However, the title is fucking lame, and hearing it over and over in Sesame Street safe tune is a little spin-tingling.

Woman to Fly­- 3  Moody, easy listening track with guitar strums, Pollard vocals, and ambient synths in the background. Upwardly spirited and comfortable. Easy to nestle into, but not much else.

Getting Going­-  1 Heavy hitter, with spiritless vocals. Grab some hotdog buns because here’s a steaming pile of filler for ya’.

Spill the Blues- 3 Lonely sounding acoustic ender. Distant, sparse, and most likely-improvised, acoustic flourishes and weird noises also make cameos. A hushed good-bye to you all.