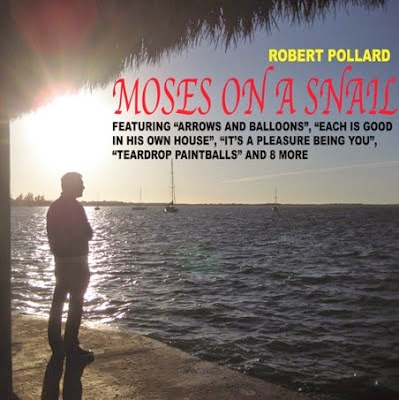 Released a hair under four months (!) since his last solo LP, Robert Pollard splashed into the summer of 2010 with Moses On A Snail.  The LP, with it's sunny, hilariously (intentionally) bad cover art, conjures up visions of late-night, dinner compilation music for the infomercial crowd.  Pollard's silhouette, soaking up the cool waters, basking in the sunshine.

When the needle drops, Moses On A Snail proves to be Pollard's darkest record of his solo collection. A dead-eyed, slow trudge though fairly hookless gloom and glum. And the one's that aren't a trudge, are still fairly lifeless. It's a record to be consumed in the dead of winter night, or a rainy day when your muscles ache. Pollard, in an interview with Magnet Magazine sites Moses On A Snail as one of his personal favorites. Upon first listen, the record may seem baffling, and flat-out garbage. A few re-visits, in the proper setting and mood reveals some differences in tracks, and my opinions have changed. Other songs on here flat-out suck.

Interestingly enough, Pollard performed the LP LIVE in it's entirety at The Canal Street Tavern in Dayton, OH. The show was billed as Milko Waif and The Bug-Eyed Mums, not Robert Pollard Video evidence exists!

The Weekly Crow- 4 If a Sunday afternoon, overcast with the emptiness of an early March chill made a song, it would be this.  Baritone Pollard. Plodding rhythm. Depressing, mildly catchy cello riff. But damn, this song becomes fucking awesome after repeated listens.

A Constant Strangle- 4 If irritated boredom made a song, it would sound like this. Ice cold, and kind of hauntingly beautiful. Ominous vocals, over powerful verses, that seem to be stuck in a puddle of molasses.  But damn, this song becomes fucking awesome after repeated listens.

Ice Cold War- 2  If you were bored at work, and the day was moving along at a semi-slow pace, it would sound like this. Jackhammer stomp of a guitar riff into a baffling boring chorus.

Each Is Good In His Own House- 3  If a sunny Sunday morning with no purpose in January had a song, it would sound like this.  Pollard takes several unmemorable riffs, pieces them together with awkward plodding rhythms, and a lead riff that is irritatingly dumb. Yet, this piece of snooze cheese is a slow grower, but a stretch at that.


SIDE B:
How I’ve Been in Trouble-2 If you ever took a nap with a mild fever while you should be out running errands instead, it’d sound like this bucket of depression. Oh boy. Gray and grayer.

It’s News- 1 Devo, staccato song?  Talk about feeling awkward. About as comfy as a straight jacket and catchy as busted baseball mitt. I'm sure some people can't get enough of this Circus Devils'-like song.

It’s a Pleasure Being You- 2 If a sad-sack tried making up lullaby on the spot for his son, it’d sound like this sad-sack of embarrassing boredom. Seriously, this are some downright cringe worthy lyrics over and slow head bob of a song. But not quite the dregs.

Big Time Wrestling- 2 Silly, bopper of song. I’m surprised there isn’t some McCartney piano bopping along in the background.  Billy Joel-esque harmonic growling at the end, into some silly child-like “do do do’s.” Kind of idiotic all around.

Tear Drop Paintballs- 4 What? Out of all the crazy song titles this man has, “Tear Drop Paintballs” gets me every time.  This is the catchiest, simple vocal melody of the whole record, and the most genuinely saddening song, in a good way. Perhaps the drinking song to end all drinking songs. Unfortunately, Pollard’s out of tune most of the time and sings “They have BAAAALLLLS,” several times.

Moses on a Snail- 4 Holy '70s Pollard hell, Moses! This is one grand, murky statement to close the record. Heavy, dark, dank and about as inviting as a wet, rotting pile of leaves but kind of a killer, over the top hammer. Only downside, nearly 5 minutes.
Posted by Eric Truchan at 7:52 PM