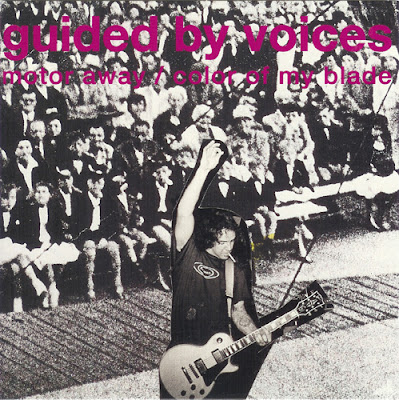 Released two months after the release of Alien Lanes, this two song 7'' contains a rerecorded, radio accessible version of "Motor Away," as well as an exclusive b-side track. It was later released on the Hardcore UFOS, box set on Matador Records.

Also, some copies were incorrectly pressed, featuring "The Opposing Engineer Sleep Alone" from the split 7'' w/ Radiant Storm King, on the B-side after the wrong master tape was initially sent in to Matador.

SIDE A:
Motor Away [7'' version]- 5  Rerecording of the positively CLASSIC song off Alien Lanes. Slightly slower, and Pollards vocals sound a little more damaged. Put simply, this is a slightly more hi-fi version of the original. Both are fantastic. This one is just more "radio friendly."

SIDE B:
Color of My Blade- 3 Moderately catchy, fuzzy mid-tempo song. Hooks reminiscent of that of the Ramones in the vein of ‘50s rock, but with more buzz and awkward changes than any ‘50s rock song I've ever heard.