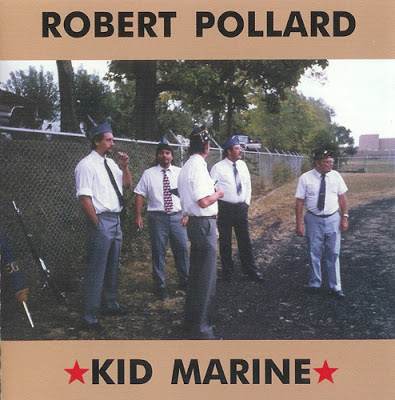 WELCOME!!!.. to the birth of The Fading Captain Series. Yes, the first official, and gloriously named record label from the heart and mind of Uncle Bob. Kid Marine, Pollard's third solo LP, would mark the first of 44 Pollard related releases to see the light of day on this "series," which came to an end in 2007.

Kid Marine was released less than five months after his last solo effort Waved Out on Matador Records. Kid Marine, and the introduction of the Fading Captain Series, ushered in a new wave of an unexpected, and seemingly bottomless pit of Pollard material. Gone was the middle man, for better or worse, of the outside label mogul. The gates were open, and the songs were to become plentiful from 1999 to, well, who knows when.

As a whole, Kid Marine is a mixed bag. Upon release, reviews seems to sway towards the negative and general confusion as the revered songsmith king had perhaps finally gone off his rocker. In the end, Kid Marine has aged well in the cannon of releases. No doubt, it has paved the way for the anything-goes Pollard package, but also, a decent chunk of the "anything" is worth hearing.

SIDE A:
Submarine Teams­- 4 Schizophrenic jibber jabber flutters and opens the track and never cuts out in the background. Why? Because Pollard's losing his marbles and it couldn't be better. However, the rest of this track is pretty great. Shit, even at 5 minutes!!! Mid-tempo, well written rock tune with infectious melodies, and pensive bridges.

Flings of the Waistcoat Crowd- 4 Acoustic, doubled vocal offering. Reminiscent of Propeller or Alien Lanes material. Simple and effective. Feels like a track that would have fit nicely in the middle of any GBV album from this period.

The Big Make-Over- 3 Repetitive guitar riff holds this breezy track together, but it doesn’t really take off at any point. Lazy, less exciting take on “Dayton, 19-Something- and 5”?

Television Prison- 2 Holy hell. Turn on VH1 Classics because I think this songs on there right now. Early ‘80s chugging number with tacked-on bad attitude. High pitched scream in the middle for good measure. Solo into the instrumental outro is the coolest part of the song and THAT gets a 4.

Strictly Comedy-4 Weird accordion like keyboard backs the track that actually works. Catchy, with cool seesaw guitar riff throughout the song.  Sign me up!

Far-Out Crops- 2 Guitar strum and vocal opening breaks into back and forth guitar riff.  The falsetto delivery of “Far Out Crops” is cringe inducing in an otherwise good song. Vocal shat and bad decisions knock it down a peg.

SIDE B:
Living Upside Down- 2 Autumnal moodiness with vocals over guitar strums and synth swells in the background for the first half. This eventually shifts and devolves to proggy guitar blimps and burps. Forgettable.

Snatch Candy- 2 Reclined guitar strummer reminiscent of some mid-‘90s radio rock. Pollard’s vocals seem to be shifting in an out of whatever melodies he’s reaching for. They make snooze-buttons for songs like this, you know? Actually, that would be the dumbest fucking invention ever. Who would use that?

White Gloves Come Off- 4 Simplistic acoustic song reminiscent of many a GBV openings.  Eerily pretty. Haunting? Sure, but happily so? I don't know. It's a grower, for sure.

Enjoy Jerusalem!- 3 Moody, hypnotic tick-tock of the grandfather clock guitar part. The surreal lyrics “The cake maker never fails” will one day be tattooed on my back. Am I serious? I hope so. Certainly not one for the ages,  but a throwaway that, in this case, works.

You Can’t Hold Your Women- 2 Opens with what sounds like a kid in a remedial piano class trying to record his progress after day two. Hushed track eventually blows open into plodding one snoozer. Not of much note.

Town of Mirrors- 2 Quiet, start-stop rhythmic jolts played on guitar make up the first part of the track, in a surreal confessional sort of way. Second half explodes into a sonic blast, while Pollard lyrically repeats “Mutilation.” End scene.

Powerblessings- 4 Simple demo quality song that’s pretty catchy with a, dare I say, dreamy feel. However, the outdated, ‘80s synth is out of place and altogether unnecessary. Still, a solid outing here.


Island Crimes- 3 Song for the post hangover. Slow, sparse, subtly uplifting, and contemplative. A decent and lengthy closer.
Posted by Eric Truchan at 9:57 AM