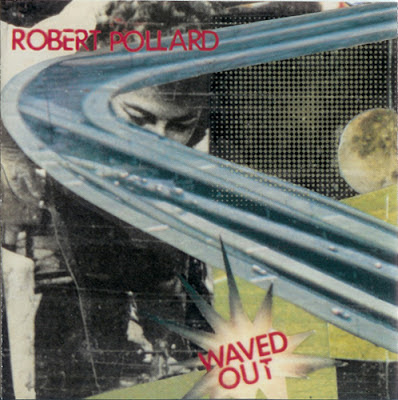 Returning to Matador Records for his sophomore solo outing, this would be the last solo effort before Pollard jumped ship and started putting out solo/side-projects at a delightfully nauseating pace. Unlike its predecessor, 1998's Waved Out is a more consistent LP in dynamics, and pacing. However, it lacks the spontaneity, and short, pop gems that made Not In My Airforce so great . In lieu of snippet, lo-fi offerings, the LP consists of longer tracks, running the gamut of the rock realm (something Pollard would become known for on his solo offerings); a balance between wizardry pop, solid indie rock, noise rock, and moody dirges, Waved Out is a  fine followup in the cannon, although not without a few head-scratching moments.


SIDE A:
Make Use- 4 After the lo-fi fragmented affair of Not In My Airforce, Waved Out kicks things off with a genuine studio recording, much fuller, bigger. Also present, some of the proggier elements Pollard would begin to saturate into his solo efforts. “Make Use” is a slow moving piece, accented by pounding tempos, and delicately picked minor chords. The chorus is extremely massive, and much invited after a verse that kind of feels like its crawling.

Vibration in the Woods- 3 Shorter song with simple guitar stabs over lo-fi drum hits in the background. Creepyily and easily catchy.

Just Say the Word-  2 A slow moving song that’s about the darkest Pollard had ever sounded up to this point. Was he wearing his wizard cloak for this recording? Be warned; annoying sound effects in the background will most likely REALLY get to you.

Subspace Biographies- 5 Steady, pop-prog song with great guitar leads, and huge choruses that rank among some of the best of Pollard’s solo output. Not to be missed.  Add bonus points for the lyric “Stoned Comedian Ringo.” Only you, Bob. Only you.

Caught Wages Again-3  Bizarre, woodsy lo-fi folk. The kind of folk suitable for the Sci-fi channel, if you will. Cool little home recorded gem. Not one to be put on repeat necessarily, but still a nice one to revisit.

Whiskey Ships- 3 Early '00s GBV sounding track, that’s both familiar in its tone and delivery. The drawback, out of place, upwardly mobile guitar riffs and more unwelcome noise pieces popping in and out of the track that feel arbitrary.

Artificial Light- 2 Depressing, gently picked guitar meets a vocal track that doesn’t go anywhere. Put this in the dustbin of the history of zzz's.

SIDE B:
People Are Leaving- 3 Schmaltzy, piano and ride cymbal lounge type number with dual Pollard vocals that mash two different vocal lines on top of each other. Sounds like a subpar McCartney tune, but pretty goddamn catchy after a few listens. “Gift to every naked fat baby” line is the definition of torture though, and opposite of aforementioned "stoned comedian Ringo" line.

Steeple of Knives- 2  "Hard rocker” that comes off sounding far too annoyingly hokey and forgettable.

Showbiz Opera Walrus- 1 HAHAHAHA  Bob Pollard does Tom Waits in space? “Being For the Benefit of Mr. Kite,” animal noises thrown in for good measure. Kinda like this, but c'mon! Good God!

Pick Seeds From My Skull- 4 Eerily distant and haunting, but in a great way. A downcast piece with acoustic guitar and lazily strung together melodies, and awesome lyrics. Sounds like a Rob Crow solo song.

Second Step Next Language- 3 Lengthy closer sounds like it’s broadcast through a broken transistor radio, so that fucking rules.  Fuzzy guitars meander along, as noise begins to pop up. The track begins to fall into a surreal ambient ditty.