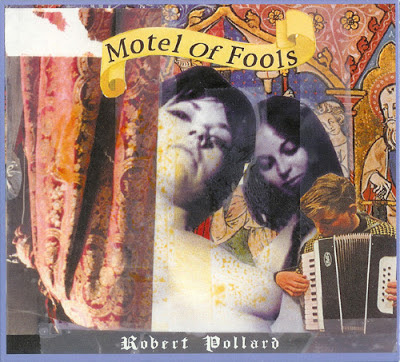 FOUR YEARS! FOUR YEARS! Four years is a LOOOOONG time to wait when considering the almighty and ferocious release schedule of Robert Pollard LPs. But such was the case of Motel Of Fools LP. At 7 songs, track wise, this is begging for the EP label. However, at 31 minute plus, the length garners LP status.

While working on various side projects, and further supplying the GBV output of the early 2000's, Motel Of Fools arrived a  year before the (temporary) dissolution of Guided by Voices. Pollard released this LP as a "soundtrack." A soundtrack to what you might ask? Who knows? Something he made up in his head, we can all assume. "Since no one contacts me to do soundtracks, I thought I’d do one on my own," said Pollard of Motel Of Fools.  Seriously though, what a cool guy. He is doing what others used to do at seven with a toy store tape recorder. But here's a grown man, putting in real time and effort, furthering the conquest of Pollard. This is why nebbish fellows and fellowettes like myself write blogs about this guy.

Anyway, the overly long, cerebral piece of this EP as a whole is a bit much to get through. Little to no hooks and mostly moody downers soak up the seconds of these fairly dismissible  tracks. But then again, it is categorized as a "soundtrack", and in that realm it makes sense. Following this, superfan and Hollywood director Steven Soderbergh (Sex, Lies, And Videotape, Ocean's Eleven, Traffic, etc.) commissioned Pollard to work on music for his film Bubble. This effort was later released as an EP Music From 'Bubble'. As well as this, Pollard had also reportedly been working on a full-length film, Soderbergh's Cleopatra staring Catherine Zeta-Jones that's yet to see the light of day after nearly 15 years.


SIDE A:
In the House of Queen Charles Augustus- 2 From the opening minute, you know you’re not in for the typical Pollard solo affair. “Truly I saw…” repeated with various lines recorded alone in an open room, followed by moody acoustic, ambient noises, and obligatory tom hits.  Not a stand alone track on anyone's watch. Lengthy, mood piece, that’s interesting enough for some revisits, but just boring enough to keep off your playlist.

Red Ink Superman- 3  First minute and a half is slowed down warped vocals. So skip ahead of that to find depressingly cold, heavy-handed parts that play out like a mini-epic, but never quite bring the hammer down. Semi-GBV-esque, this track was later adopted for their final run of shows in 2004.

SIDE B:
Saga of the Elk- 2 Drab composition of clean guitars getting muddled around alongside some dreamy vocals. Dragging and forgettable.

The Spanish Hammer-  1 Acid balladry, lyrical brainstorming, and meandering over four separate parts and nearly seven minutes!  Certainly a trippy mood piece that can aid in any avant home listening experience. Pulled out of the Pollard pop songsmith confines, it has the ability to pique some interest from time to time, but it’s really mostly a muddled mess.

Harrison Adams-  3 Amusing spoken word bookends this song  The most GBV-like of the album, and this was also adopted into the live set at points int he early ‘00s. No forced melodies, no awkward proggy guitar sections. Good old fashioned soft rock and the renegade. Good finish to a bizarre and ultimately difficult, short LP.