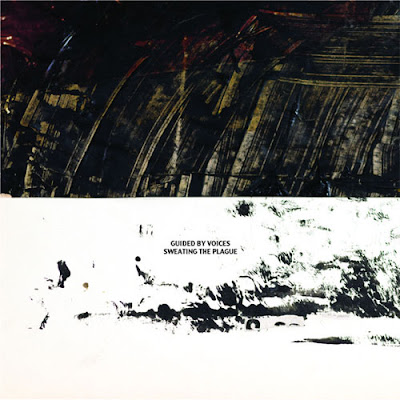 It's like 2012 all over again! Guided by Voices, with continued second reunion line-up forging ahead without end in sight, have released their 3rd LP of the year; enough to leave even the Pollard-addicted fans even somewhat satisfied with the sheer bounty of output!

To close out the 3 LP run of 2019, Guided by Voices decided to release their shortest LP to date; a 12 track affair of prog-heavy rock songs that take their time to unfold. It's a batch of material meant for you to sit with. It's also a dozen tracks meant to be played LOUD!

From it's brevity in tracklisting to its dynamic mid-song shifts, it's unlike any GBV LP of the past, perhaps having more in common with some of Pollard's side projects. Think the bottom heaviness of Zeppelin Over China blended with Universal Truths and Cycles/Earthquake Glue era prog. Then add in the gray-skies rock of Ricked Wicky's Swimmer to a Liquid Armchair, blended with dashes of the rock-centric moments in Circus Devils' Stomping Grounds. It's a downer of a record, but one that never feels too heavy a burden to bear. In fact, it manages to be one hell of an uplifting rock record, despite all it's angular jabs and surprises. With each spin, you may find yourself turning the record up to maximum listening capacity.

One of the key highlights of the record (which is so strong on LPs like Space Gun, and felt sorely lacking on Zeppelin Over China), is the sheer force behind Pollard's voice. He sounds determined, on-key, demanding. His harmonies hit in all the right spots (often hiding in these songs rather than immediately jumping out in a trad "pop" chorus). Engineer Travis Harrison continues to delight in the recording process, perhaps doing his best work yet. The band (Gillard, Shue, March, and Bare Jr.) really flesh this record out, turning Pollard's sketches into a bracing GBV record that truly rewards the listener with each repeated listen.

33 years into his career, Pollard has perhaps succeeded in something he's never done before; creating the most unconventionally infectious GBV record of his expansive discography.

﻿
SIDE A:
Downer- 2 The strangest GBV opening track of any LP in the canon, and for that, part of me wants to praise this song to the high heavens. Unfortunately, it's not a great song. Still, "Downer," is a post-punk/krautrock track that relies on feel but with addictively simple moments sprinkled about. Way more of a mood piece than song, but a jarring way to start off the record, setting the pace. Begs for (and gets) relistens out of sheer curiosity.

Street Party-3 Originally slated to be the titlet rack of the LP, "Street Party," is more traditional to the GBV formula, but still left of center at times. A steady rocker that falls into "average" territory. The most arresting moments are scattered about in the song, both instrumentally and in Pollard's verses, rather than the fairly bland chorus of "It's a street party. And the heat is insane."

Mother's Milk Elementary-4 Warbled acapella Pollard opens this up, brittle and beautifully. When the band kicks in with its slug-slow rock, this turns into a hulking haunt of tune. The even more haunting instrumental interlude into the bridge becomes spine tingling after repeated visits. Grows on you like a slow acting mold.

Heavy Like the World- 5 The first and lone single released for the record, "Heavy Like the World" is a Do the Collapse/Isolation Drills callback number. Really feels partially like a mash up of several GBV greatest hits moments. Fortunately, I don't sicken of these harmonized moments of joyful melancholy. Epic and beautiful.

Ego Central High- 4  Feels partially like a paint-by-numbers hard rock riff song, but damn this song sinks its hooks in. The band takes their time, laying down an almost hypnotic crunch throughout. Dig that Circus Devils-like pounding bridge, into double timed pogo-punk part. Pollard comes off reserved, busting loose vocally during the doubled chorus parts. Like the entire record, it's best played at top volume.

The Very Second- 4  Seemingly random acoustic strums eventually bursts into cocksure guitar rocker that gets better with age. The song keeps its foot firmly planted on the octane all while building throughout, going from big to bigger! Pollard sounds incredible on this track. The guitar work of Bare Jr. and Gillard really shine. And that brief hyper-charged outro? Oh, my heart. One song that begs for a stadium sized setting.

Tiger on Top- 3 Rickety intro again bursts forth as the band delivers a start-stop progged up rocker. Begs for a crank of the volume nob. A bit uneven, even for a record bursting with uneven transitions, and surprises. A grower for sure, but possibly one too many twists and turns for its own good. The "tiger on top" part scorches, though!

Unfun Glitz- 3 Bottom heavy, crunchy with some potent Pollardian pipes. Perhaps a little too by the book at times, "Unfun Glitz" is above average at best song, but one that elicits a fist-raising response. The band is locked in, and pushes it over the top but like it just falls shy of the mark.

Your Cricket (Is Rather Unique)- 5 Demoed as track 98 on the Suitcase 4 collection, this song was originally released as the B-side of the You Own the Night 7'' released in 2018. The same track returns for its proper LP debut, drummer Kevin March taking lead vocal duties. As proven in August By Cake, March as a downright killer voice. Beside that, this proves to be one of Pollard's most beautifully written songs. Anthemic, heartfelt, complete gorgeous melody. Travis Harrison's production (combined with Gillard's guitar jangle, and March's tick-tock drumming in the verses), make this one of the great GBV moments of second reunion run.

Immortals- 5 A steadfast hard rocker that stays the course, building in the choruses.  Guitar heavy with solid backbone and stiff upper lip attitude that never feels like posturing. A confident Pollard shines, sounding honest and potent, shooting from the hip. The repeat anthem outro is forcefully hooky below the surface, really standing as shining moment in GBV rock.

My Wrestling Days Are Over- 3 The throw-away of the LP is still interesting (and short) enough to continue to revisit in all its strange glory. A true Circus Devils moment if you will. Pollard boom-box demo-like beginning with overdubs is downright haunting. When Pollard sings the title, it actually hurts. Unnervingly, this song leads out with downbeat stomping and unfettered guttural screams.

Sons of the Beard- 4 Pollard has written a few of these multi-faceted, rock-operaesque songs throughout his career to varying results. Admittedly, I'm not much a rock opera fan so perhaps I come off biased during these moments. However, "Sons of the Beard," really delivers. It feels like an amalgamation, a condensed recap of the entire record crammed into one song, riding on feeling and pure sonics alone. Fittingly, the song ends with the same chords that opened the record, an endless circle that is Sweating the Plague.
﻿
Posted by Eric Truchan at 7:10 PM