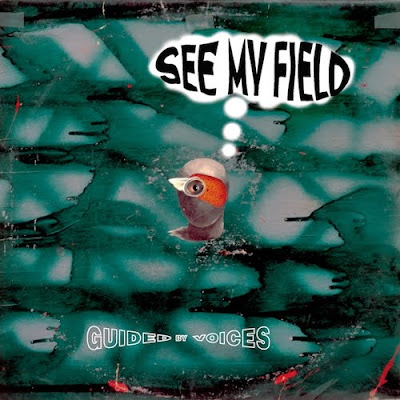 The second of 3 singles released from GBV's LP Space Gun. Limited to 500 copies worldwide, the record was posted on Rockathon Records and sold out its pre-order run in a matter of hours. The B-side features 2 exclusive tracks from GBV band members not named Pollard. The record was pressed on clear green vinyl!

SIDE A:
See My Field-  Same track that appears on the Space Gun LP. Check the review over there!

SIDE B:
Disconnected Eyes- 4 Bassist Mark Shue gets the first showing here on Side B. A western style drum stomp holds this one together, rolling along with souring melodies from Shue. Incredibly grand as the song builds, soaring in the choruses! A potent melodic statement of near symphonic proportions.

Leave Tomorrow- 5 The last time we heard drummer Kevin March's contributions in the songwriting field for GBV, he was practically stealing the show with his two tracks off August By Cake. Here, March continues to make his case that he may be sitting on the best GBV-side project LP never released. A bit of a mid-west, Mould feel to this mid-tempo pop gem. Acoustically reinforced, the electric leads are prickly and syrupy. One of the best 80s college rock songs you never heard before.