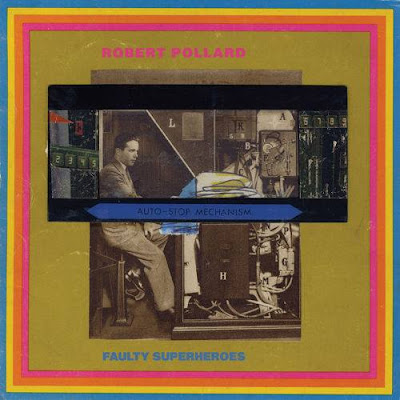 After a near two year absence from the solo moniker, Robert Pollard returns with another his 21st (says Rockathon Records press release) LP under his own name. Before we get into it, let's crunch some numbers. It's been 524 days since Pollard last released a solo album, the longest stretch since 2004's Fiction Man and 2006's From a Compound Eye (but who's counting). It's not like Pollard hasn't been busy....

Since the release of his last solo outing, 2013's Blazing Gentlemen, Pollard has dropped at ton of material; 2 Guided by Voices LPs, 9 GBV 7''s, along with 3 singles and the debut full-length from his newest offshoot, Ricked Wicky (with more on the way next month). So, I guess you can excuse a guy for taking a day off from slapping his full name on a LP. In style, and as not to miss the fan humor that comes along with his prolific output, the splash sticker adorning this most recent LP reads, "FIRST ALBUM IN OVER THREE MONTHS!," a most irreverent, self-referential proclamation to the joyful burden his faithful care to bare. In short, Pollard simply doesn't take too many personal days, official solo LP or otherwise.

Taken as a whole, Faulty Superheroes is a trim 12 song, 30 minute streamlined power-pop record. There's little divergence among the material here compared to some other Pollard efforts of the past. Along the repeated hooks and grandeur, we find Pollard dipping his toes in the prog scene from time to time (nothing new, but perhaps less expanded upon throughout the record than others). Pollard, unabashedly, takes a few sharp lefts from time to time too, relying on the always welcomed low-key stadium rock via Dayton basement daydreams.

As (nearly) always, Pollard worked with long time collaborator/engineer Todd Tobias to bring this to fruition. Also, an added bonus, Pollard recruited the on-a-dime-solid GBV/Ricked Wicky member Kevin March to tether the backbeat. In comparison, after a messy mid-00s of Tobias produced Pollard solo records, the past few outings from the Fading Captain have really shown some lasting promise. Faulty Superheroes is, largely, a winner.

SIDE A:
What a Man- 4 Prickly guitar lead fades into full on obtuse power pop assault. Todd Tobias has really been nailing this Pollard production on these past solo efforts. Pollard vocals on this are catchy in a lax, but solid way. The crux of the song rides high on its infectious repetitive guitar riff and propulsive instrumental bridge. A statement of an opener.

Faster the Great- 3 A punchy number. Far from a snoozer. However, it feels like Pollard just missed his mark here, vocal wise. The performance is spot on, melody wise, it's as if it just doesn't fit, spilling over the sides at parts. Descent if not unnecessarily disjointed.

The Real Wilderness- 4 Stoner sludge (well, for Pollard anyway) with a psych spin, complete with frosty vocals and Circus Devils worthy synth drones in the deep recesses. A real surprise gem. Worthy of lifting the needle back to make sure that really DID just happen.

Photo Enforced Human Highway- 4 Hard hitting with some questionable vocal melodies toward the beginning. The song seems most memorable for its repetitive, Who-like stadium rock start-stop parts that lead to eventual takeoff and flight, and ultimate redemption. The "epic" of the LP is a worthy contender.

SIDE B:
Take Me To Yolita- 4 Oh man. Eye roll worthy word play here, but... Equal parts classic rock bends, drugged jam, and simplistic pop hooks. Wholly familiar territory that meanders about and is subtly infectious, if not obnoxiously so. Can't get this one out of my head, which is why it probably serves as one of the singles from the double-A side (not listed on this blog). Bridge is also something straight off Earthquake Glue era GBV.

Up Up and Up- 5 Sharp guitar and drum build expands into warbled pop gold. Pollard sounds a bit shaky on this laid-back GBV rehash, yet it makes for genuine charm. A tour de force of trebled pop guitar punches and lead bass hooks. An understated new Pollard classic.

You Only Need One- 2 Mid-tempo verses with accented dive-bar-rock guitar riffage thrown in. The song never really takes off, meandering in stream of consciousness territory.

Bizarro's Last Quest- 3 Mainly plods along, but ultimately works. Icy guitar riffs among middle of the road rock takes its time. Eventually, it all builds into a repeating chant-like ending over a reworking of Pollard jangle riffs that have come across the radar at one time or another.

Mozart's Throne- 3 Cheesy heavy metal copping on the verses that lead into an expanded chorus of some note. Rather airy prog production after the chorus. Wish Pollard was a little more in tune with his "Mozart's Throne" chant. Sounds like a Circus Devils outtake at times. This one grows on you.

Parakeet Vista- 3 Acoustic closer with pensive Pollard proclaiming "just let them sing," as we faded out with skeletal guitar plucking. Reminiscent of a lot of interspersed songs from the early to mid Pollard solo era. By itself, the song isn't much. However, as a closer, it's a haunting, but fitting end to an otherwise bright exhibition in pop/rock exercises. Repeated listens benefit.