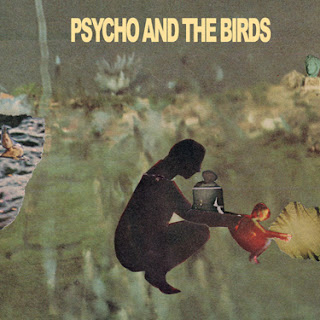 Just when you thought Psycho and the Birds was a dead side project, Pollard and Todd Tobias (Circus Devils) are back with their 2nd (and, to date last), LP.  As was the case with the previous 2 PATB's releases, We've Moved was constructed from skeletal boom box recordings made on the fly by Pollard.  Todd Tobias then filled in the rest at this studio.  The results, are again, rather frustrating. Muddled production, and clashing ideas. Depending how you look at it, this looks to be the final Psycho and the Birds release with Pollard and Tobias continuing to work on the wholly more satisfying Circus Devils project and proper Pollard solo albums.

Side A:
Who Lives In a Thundercloud- 2 Sounds like a throw-away track from one of Pollard’s solo outings, but with the vocals buried. Mid-tempo, unremarkable song.

Enon Beach- 2 Drab, depressingly cold, whack ‘em over the head song. Tobias tries to fix this unmemorable pile of nothing with an annoyingly simplistic guitar riff and stop-start percussion.


Side B:
She Fears Out-  1 Tepid, mid-tempo new wave song with redneck vocals. CRIPES!

Hound Has the Advantage- 2 One of the most normal, repetitive rock songs on the album, but tarnished with out of place horn-like synths and  out off-key vocal bellows from Pollard.

I’m Never Gonna Leave, You’re Never Gonna Win- 2  Mid-90s alt-rocker, but unfortunately Pollard sings like his foot’s caught in a bear trap at his favorite saloon, and the song starts sounding like it gets caught in a nu-metal groove by the end. Nu-metal? Yikes!?!

Sharp Apples- 1 Makes about as much sense as the title.  Rickety, acoustic chugging underneath bashing drums, and slurred lack of intelligent words. Seriously, I don’t any actual words are sung in this tune.

We’ve Moved-  2 You've moved? Oh joy. Leave the neighborhood, promptly. Acoustic, sad bastard song, with slurred off-key vocals and all that make Psycho and the Birds so damn….. you know.
Posted by Eric Truchan at 3:54 PM