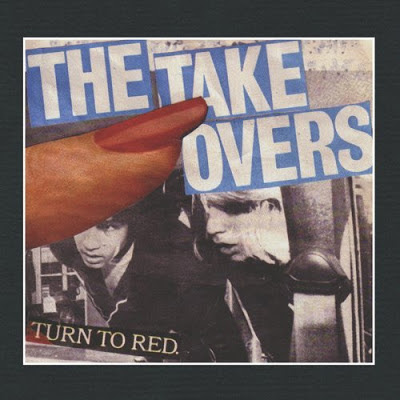 The Takeovers were a short lived side-project, featuring Robert Pollard and Chris Slusareno (GBV, Boston Spaceships). Pollard would write the demo sketches, mail them to Slusarenko, who'd then flesh out the songs, recording all instrumentation.

Turn To Red was the first of two The Takeovers LPs released in the span of a year. It's a grab bag of punk, lo-fi, noise jams, and off-beat pop. The Takeovers LPs lacked any semblance of direction that was achieved once Slusarenko and Pollard teamed up in 2008 to do Boston Spaceships.  Some bright moments on this though. Released on CD and LP.

Side A:
Do You Get Your Wish?- 2 Acoustic strums with voice over and various mystic sounding choral harmonies behind said spoken word. Not really a song. Mildly humorous. Acceptable for an intro. How to rate it?  I don’t know. I wasn’t irritated.

Insane/Cool It- 3 Lo-fi garage rock tune. Fueled by simplistic chord progressions. Decent song in the vein of late ‘60’s/early ‘70’s “cruising” song. If from another time, could have been on the “Dazed and Confused” soundtrack or some other appropriate period piece.

First Spill is Free- 2 Repetitive, minor chord jangly number. The spelling song, if you will. Not the dregs terrible, but not much of note here.

Scuff With Nature- 4 One of my favorite openings and verses of the Pollard side-project cannon. Very reminiscent of GBV-tunes.. However, deduct one point for the idiotic lyrics that I often find myself singing out loud at inopportune times.

Sweet Jelly- 1 Features what sounds like a group of men talking. Bullshit's then played on an acoustic guitar. Suitable for the dumpster.


Side B:
Fairly Blacking Out- 4 Harder, hookier number. Pure gold compared to most of the arbitrary stuff on Side A. Probably the most “normal” of the songs on here.

Wig Stomper- 1 Uncle Bob doing some bullshit drunken scat nonsense on an answering machine and releasing it as a song. I’m not kidding. PLEASE.

Be It Not for the Serpentine Rain Dodger- 5 Vintage Pollard abounds in this airy pop song with see-sawing guitar riffs, and bright choruses. Lo-fi charm too boot.  f only The Takeovers capitalized on this rather than rattled ideas.

Jancy- 2 Helium voiced, ultra-British Pollard sounds more humorous than anything. Songs pretty much a wasted scrap and a crap closer.