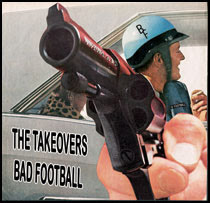 The 2nd, and to date, the final The Takeovers LP. Again, we get another pairing between Robert Pollard and Chris Slusarenko (GBV, Boston Spaceships). Following this release, Pollard and Slusarenko began work with John Moen (Decemberists), on the more focused, and highly rewarding Boston Spaceships.  This record, is arguably a more focused affair than affair than affair than Turn To Red. However, the LP still feels like a listener ride, weaving unevenly in and out of leftover ideas lying around near the under the desk waste basket. One notable raise of the eyebrow for the LP, a rather interesting smattering of who's-who appears on this record, featuring guest drop-ins by Stephen Malkmus (Pavement), Tad Doyle (Tad), Dan Peters (Mudhoney), and the aforementioned John Moen.


Side A:
You’re At It-  4 Slower, strum-along rock song. Lazy, haphazard with a waft of pot smoke pouring from ever chord. Awesome, clawing, who-gives-a-shit opener. Stephen Malkmus also plays somewhere on this track.

Little Green Onion Man- 3 Song carried by its lazy, and excellent bassline!!! But then Pollard decides to do cringe worthy vocal acrobatics, jumping from his helium voice to his deep, gargoyle drunk dad voice. The music’s a 5,, but overall... An exercise in how to shoot yourself in the foot.

Father’s Favorite Temperature- 3 Sounds like a slightly garaged up current jukebox country tune in the verse. Choruses are pretty okay. Wonderful, swoop in by the fuzz solo in the middle that blankets most of the tracks. The true highlight.

Molly and Zack-  2 Who are these people?  Not sure. Moody acoustic number that you can file under forgettable.

Pretty Not Bad- 2 Hold on there. Is this the Hold Steady on the verses? Storytelling techniques over cock rock stuff. Boring stuff at that.


Side B:
I Can See My Dog- 2 You've gotta hear these lyrics. Literally contains lyrical content about his dog, and is a pretty average song musically. But man, this is just lame. And WAY too long for its own averageness. But you know what... I can't get it out of my fucking head.

The Jester of Helpmeat- 1 One minute plus track. Starts in the right direction with lone guitar, but then breaks into nasally, cartoonish Pollard vocals and whistling synths where Pollard declares “The Jester of Helpmeat”is not fucking around.”  Piss my pants every time.

Kicks At the Gym- 1  Laughably quotable song title with equally shitty lyrics. It’s a damn shame Tad's own,Tad Doyle, pops up on this track. Funny, I guess for Pollard and his bar-buddies. Music laced with ‘tude, and lyrics laced with head-scratching nonsense. Don’t wax to me about irony either.

Music For Us- 1 Piano intro with deep crooning Pollard vocals. ‘70’s songwriter sounding at first. Eventually, breaks into soggy strumming tune, and back again. Song itself shows some bright, but schmaltzy potential, but again Pollard takes a crap all over it with a smattering of vocal stylings that sounds like he's stuck in a karaoke asylum. A poor man’s “Bohemian Rhapsody.” A very poor man’s.

The Year Nobody Died- 2 Sparse guitar strums with humdrum lyrics.  Ambient synths back up the barely amplified guitar eventually, but who really cares at that point?


My Will-  4 Although the lyrics sound like a high school poem Pollard free-wrote during a creative writing class, the song is a complete bright spot after possibly the worst B-side collapse of any Pollard release ever. “My Will” is vintage Pollard strength, played out wonderfully by Slusarenko.
Posted by Eric Truchan at 4:00 PM