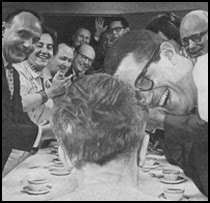 Released around 8 months AFTER the release of Bad Football, this single for "Little Green Onion Man," offers up a surprisingly strong b-side, considering the hit and miss style of the previous two The Takeovers LPs. What the hell, The Takeovers? Quit playin' with my emotions!!!.  Limited to 1000 CDs and 950 (yes, 950) 7''s.


SIDE A:
Little Green Onion Man- Same song as on Bad Football. Look there for review.


SIDE B:
Rich Man’s Girl- 3 Total downtrodden basement tape with overdubbed instrumental parts to resurrect this fairly decent demo into a listenable and pretty enjoyable lost gem. Nothing of great note, but one wonders why this was hidden on an EP while “The Jester of Helpmeat” takes up LP space?

Side B:
Wigstomper 07- 4 The worst excuse for a song from Turn To Red gets revamped in the year OH SEVEN. This time, whatever inside joke appeared on the LP is now a boombox recording of a Nirvana “Bleach”-era type cut. Where the hell did this come from?


Instigator-  3 What sounds like another demo with added instrumental overdubs is a simple toe-tapper with breezy vocals. Again, a refreshing add on to a relatively obscure EP, capping off the strongest release by The Takeovers.
Posted by Eric Truchan at 4:02 PM