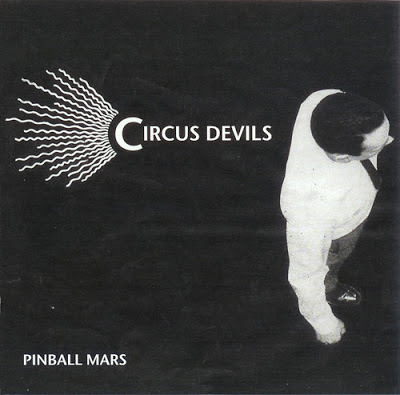 The third straight Cirucs Devil's LP, (and last until '08s Ataxia) to be released on Halloween, Pinball Mars is another outing of Pollard and Todd and Tim Tobias sharing their conjured up psych-disconnect. At 14 songs, it remains the shorts album, track wise, for a Circus Devils LP to date.

Like its predecessor, Pinball Mars is somewhat of a concept album. Most lyrics from Pollard are split up as dialogue, between different characters and a narrator (based on the guidance of the trusty lyric sheet). In the end, none of this makes much difference, and if there is a story in this sci-fi centric sound-scape LP, damned if anyone can make sense of it.


SIDE A:
Are You With Me? - 3 Bass heavy, cymbal smasher with a touch of the Circus Devils sickness. Pollard is in a bit of vocal-hernia mode but regains his footing with some shout-singing during the fade out.

Gargoyle City- 4 Sweaty, southern rock with rattled bass eventually melts into hard-rock-prog-nightmare with Pollard vomit-vocals and rhythmic backing laugh-track. This might sound like the worst mix to throw in a blender, but this one's pretty strong. A more over-the-top version of the opener.

Sick Color- 5 Initially similar to Fleetwood Mac's "Go Your Own Way," but essentially melts into an alternate version of "A Man Called Aerodynamics" from UTBUTS. What? How? I don't know but damn it's good. Warped pop in the studio magic universe of Circus Devils. Chalk this on up to the surprise hit of the LP.

Don't Be Late- 2 The song that wants to be a GBV song but warps into shitty '80s radio rock with crappy Circus Devils effects and out of tune Pollard vocals. If you're late to this one, it's okay.


SIDE B:
A Puritan For Storage- 2  Side B swells in with some flange guitar and cymbal roll. Then, just a bunch of muck to wade through. BUT (!), only a minute and a half of it. A weak track all around, setting the mood for the rest of Side B.

Plasma- 2 The space shit saga continues but who's listening? The revolution will not be beamed live via satellite. Oh wait, this locust-buzz bass driven, instrumental fart fest is actually tolerable, but barely.

Dragging The Medicine- 2 Acoustic plucks over spacescape fucks and fiddles. Psych, sci-fi type soundtrack unfolds slowly. Nothing to solely seek out but the track essentially helps tie the B-side together.

Bow Before Your Champion- 3 Pollard sings some rhyming repeating lyrics that get cut off. Okay, this is a "song" compared to the rest of the flip-side.

Glass Boots- 2 This space dirge stomps along in its own dank filth. Aptly named and executed. Just not really worth hearing. Sounds like a hangover after-thought.

(No) Hell For Humor- 3 Clean vocals over slo-core, minute long wallowing. As outwardly enjoyable as it's gonna get.