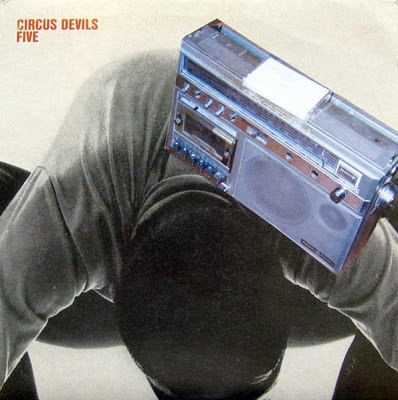 Following the release of Pinball Mars, Circus Devils began work on their reported epic, double LP masterpiece, Sgt. Disco.  However, Pollard and Todd Tobias (this time working without brother Tim), decided to throw a wrench in the works and release their fourth LP Five.  According to the release info on gbvdb.com, Sgt. Disco was "shelved."  However, Five has a feel of being almost a complete throw-away, even in the weird wold of Circus Devils.  Even by their standards, this one makes little sense.  The most subdued LP of the cannon, Five feels like an incomplete collection of hushed snippets and dead-end ideas lost in the wind.    It would be two years and change before the epic Sgt. Disco LP saw the light of day.

SIDE A:
The Bending Sea- 2 Minimal orchestral soundscape with digital Pollard on the mic. A cold, lonely two minute opener.

Look Between What's Going On- 2 Remote vocals again, over prickly prog blips and avant gurgles, none too abrasive.  Slightly more substantial than the opener, but only by a hair.

Just Touch Them- 1 Junkyard avant garde evolves into minimal acoustics, then leaps into auraul pulsating. No thanks though. Okay. Slips into...

Dog Lick Baby- 3 40 seconds of over-the-phone type vocals.  Over before it starts, and the brightest spot yet on the LP. And that's stretching it.

Thelonius Has Eaten All The Paper- 2 Pensive see-saw synth pulse as Pollard sing-speaks some stuff over it. Uh-huh.

Strain- 3 The most "song" like up to this point. Bass and drums hold it down, while crystalized synth shards glide over it.  Pollard sings some stuff, but unfortunately, pretty out-of-tune. Even though there isn't much of a tune here.

Future For Germs- 4 Pollard delivers some decent, arguably soulful, repetitive vocals over short spurt of actual song!  Yes! Whoa! Where'd this come from?  Hey, repeat if you must.

Effective News- 2 Cut and past approach of vocal and music stylings. Sound like Uncle Bob is singing into the void, before he switches to more cryptic spoken word.  Unsettling soundscapes carry this out.

No Wonder They Don't Stand Tall- 3 Cold as 3 a.m. in January in the mid-west. A fuller representation of what this LP is trying to accomplish, but often fails to do. Pollard croons over sparse guitar jangle, and atmospheric landscapes.

We Taught Them- 1 Phoned in, even for this record.  Masturbatory tape recording.


SIDE B:
Eyes Reload- 3 Hey! It's one minute. And it makes the most sense this far in this non-concept LP.  Almost a "real" song in a structural sense.

Her Noise- 2  Sounds like a bridge-gap track off Pinball Mars. Worth hearing on its own?  No. Too avant, but two fairly discernible tracks in a row?  Side B is looking up?

"In The Mood"- 3  If this were as punk as fuck as this record gets, I'll take it.  Mind you, this is no where near anything punk. Not even for a Wire toss-off.  Pollard bellows over high-pitched distorted propulsive track with dirgey finish.  A touch of Throbbing Gristle perhaps?

Tell 'Em The Old Man Is Coming Down- 3 Solemn piano track as Pollard hauntingly sings. One of the most formed and haunting tracks on the record.

Dolphins Of Color- 4 Pollard performed this during his solo tours at the time.  Live versions even appear on the Moon Live CD, and his solo LISTW 7''. Perhaps the best vocal performance on the record, "Dolphins Of Color" is a bone chilling, ice tracks that crawls slowly into the night. Love it.

The Word Business- 4 Kaleidoscopic background flutter as upfront Pollard vocals steadily pound away.  And there's even somewhat of a hook to this!

Headhunter Who Blocks The Sky- 4 Triumphant psych rock dirdge with doubled vocals. This one is taking a trip down the kaleidoscope.  2 strong tracks in a row!

You Take The Lead- 4 Hmmm, what's this?  A sunny day, lazy pop tune tacked on the end of the record?  Cool.  Of course, there's a Circus Devils, fucked-up undercurrent to it. Short, and very welcomed.

The Other Heart- 1  One more symphonic yawner for the LP, shall we?  Instrumental, Phillip Glass stuff, sends off this snoozey record.