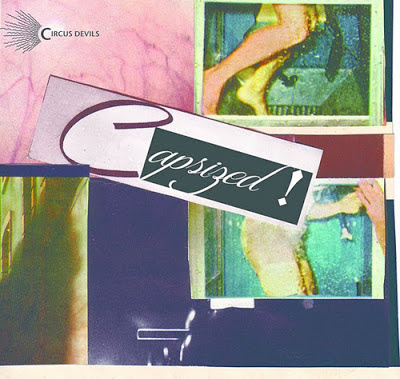 Rolling right along in the nightmare of Circus Devils..... Grab your swim trunks, hold your breath, and get Capsized! Yeah, that's stupid, but if you listen to this record in your swim trunks it's probably not as weird as this record as a whole. Capsized! has a (very) loose nautical theme to it. What does it all mean? I don't know but it's another night swim down the twisted creek of Circus Devils. Oh, and there's a straight up POP-HIT thrown in for good mix. Released on opaque blue-gray vinyl!

SIDE A:
To England The Tigers- 2 Serene soundscapes swell alongside cymbal rolls, and an electric guitar lead. Quite the picturesque opener. Cheesy, but appropriate.

Cyclopean Runways- 5 In contrast to "Capsized!" this sounds like a straight-up hi-fi GBV tune. This is, to me, the most blatant hit of the Circus Devils catalog. The cheesy undercurrent of synth is the only indication of this being a maddened Tobias/Pollard concoction. This track is complete with big rock-pop hooks, and a vintage Pollard style vocal line. Yes.

Legendary Breakfast Code- 3 About as easy-listening as Pollard gets, especially under the Circus Devils moniker. Diner music pop for your beach vacation getaway.

Ariel Poop Show- 3 Awful title, yes. The second instrumental track of the LP thus far. The same guitar line repeats over and over into oblivion as the clunky percussion transforms this into an oddly catchy, TV show theme type of dance tune.

Hangerman Suits- 3 Stomping track that remains subdued throughout, and wrapped tightly in its own guitar crunch and air raid sound effects. This song is another one that come off as mysteriously catchy.

Vampire Playing A Red Piano- 3 Again, this one tramples through a touch of Slint territory. Tobias plays an empty room, haunting piano piece while Pollard whispers a surreal narrative. Great downer to wrap up Side-A.

SIDE B
Double Vision- 2 Almost a pretty awesome song. The chorus has a simple, sweet melodic hook over the sharp guitar-buzz. But Pollards' goofy accent ruins it. Then vomiting (literal) sound clips drop by to say hi and fuck off.

What Wallace?- 1 Forget Wallace. What is THIS? Instrumental drone gurgling. Nothing more, and maybe even less.

Plate Of Scales- 1 The WORST lyrics ever for anything ever, maybe. A song about food poisoning and throwing up on oneself in near complete literal fashion. Music is slightly interesting, but Pollard murders this one. Sheesh.

Henry Loop- 2 Plodding drum stomp with acoustic hits and droning, both instrumentally and vocally. Dull, and dragging. Not much though leaked onto this one.

Stiffs On Parade- 2 Farfisa (or maybe just a shitty Casio setting imitation) plays as the bass carries this Young Marble Giants-like skeletal tune. Just the right amount of minimal, but perhaps almost too dull for its own good.

The Matter Of Being Good- 3 Hard-rocker that actually never really "rocks" too "hard" at all. Chorus is pretty decent. Could have easily found a proper home on a solo Pollard affair. This, however, has some drones and UFO sound effects, so you know it's Circus Devils appropriate.

Gable's Ear Wax- 4 Pollard delivers what sounds like a rehashed mid-90s vocal melody and sings it over a bizarre, drum rolling, and abrasively spacey track. Both don't fit, and yet, it completely works.

Safe On A Vegetable- 2 Cheesy instrumental, late-night TV soap-opera beach tune. Not fantastic, but a pretty solid instrumental track to close out the LP.