Some Of The Magic Syrup Was Presereved (2002)

Some Of The Magic Syrup Was Preserved
(2002, Fading Captain Series) 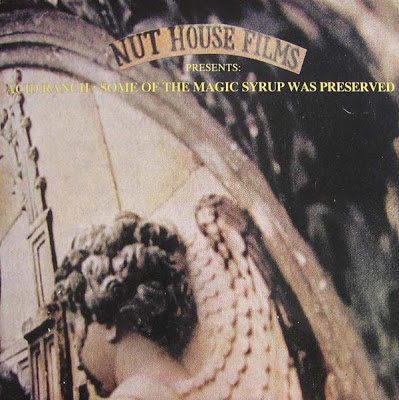 The first of 3 LPs released under the name Acid Ranch. This double LP is a real bag of rocks to carry up a real steep hill my friends. Disregard everything you like about Guided by Voices and embrace everything you like about the cosmos of Robert Pollard. Strap on your no-fi headphones, drop some bad acid, and prep your ears with some Jandek beforehand. Like all Acid Ranch records, it's a test of faith for the super fans. Interesting at times, this sits as more of a collector's piece than anything else. A double LP debut, limited to 500 copies, complete with collage booklet. Get out your wallets and place a bid on this when you can, but perhaps be warned.

SIDE A:
The Theory Of Broken Circles- 3  Well, here we are then. Subtle guitar riff and bass back-up play along, on and on. Pollard recites, sometimes howls, some surreal beat poetry in dead-pan and full on goofball vocals. Somewhere between "Hot Freaks," King Crimson, and weather-worn film strips. 5 minutes though. Beware. Can you hang?

Doctor Moon- 3 Pollard sings like he's got a case of the hiccups over steady, matter-of-fact strumming. None to out-of-left field, sans the semi-yodeling.

Redboots And The Helmet- 2 Super lo-fi recording. Electric guitar, muffled Pollard vocals. Contains the lyrics "19 Something and 5," later used in the track "Dayton Ohio-19 Something and 5" off the 7''of same name.  Unlike that song, this one's not so hot.

Daily Planet- 3 Pretty much more of "Morning Has Broken," with Jim's weird amp noise, and Bob on acoustic, singing a never-ending story about Superman. Some humor here. Wonderfully surreal ending in the same vein as a David Lynch soundtrack.

Look To The Left- 4 Frantic electric guitar strums with silly vocal delivery. Somewhat catchy, if not annoyingly so. Pretty lo on that lo-fi scale too. Charmingly obnoxious and hooky.

You Will Be There- 2 Essentially tremolo amp noise that bleeds into some home-made Dayton Krautrock. Pollard comes in with some surrealist, cold vocal stylings. Way too long though. Almost decent but just out of reach.

Mongoose Orgasm- 1 It's song's like this where I'm convinced '80s Pollard could, and does, Quantum Leap to present day Pollard. In this leap, present day Pollard tells past Pollard that you can, literally, record anything, and one day release it. '80s Pollard then leaps back to record "Mongoose Orgasm." Instrumental with garage sale drum tones, stick clicks, and squeaking dog toy!

Exploratory Rat Fink Committee- 3 Jim Pollard (I presume), plays some flange, electric guitar, and Bob Pollard sings like he's bellowing in a rubber room,while still pulling off his vintage high-kicks. Completely asinine, cranium diarrhea, that all slops up into a fairly enjoyable stew.

Dungeon Of Drunks- 2 Acoustic guitar tune. Has somewhat of a grunge-feel. Acid Ranch even pulls off a rickety melody on this but to little success.

The Megaphonic Thrift (An Odd Assembly)- 3 Droning, melancholy, and completely lo-fi organ plays the lead while Pollard croons and preaches over it. Falsetto stuff too at 1:20 in! How 'bout that? Not absurd to think some of this could have made it on to an early GBV EP, sans the ODD role call at the end.

Lonely Street- 4 Barely audible electric guitar. Pollard sings as if having smoked one too many cigarettes and hit record in the middle of the night. Short and kind of sweet for Acid Ranch.


SIDE C:
Mr. Gene O- 1 Dumbest riff. Terrible vocals. No matter how you slice it. 2 minutes too long.

I Hate Your Perfume- 2 Sad sac, brittle demo that never made the cut. It's some sort of a song, but so what? No it exists in this world. Man.

Steak And Eggs- 1 Jim Pollard does the noise guitar stuff as Bob sings an apparent dialogue between some characters (according to the detailed lyrics sheet). Bullshit for 3 minutes.

Dying- 4 Great mood piece for your college student film. Reminds me of when the improved Nightwalker material is really on point. This is terrible, but shut off all the lights and listen.

What Kind Of Love Affair?- 2 None with this song, that's for sure. Yuck yuck yuck.  Goofy, drunken folky tune in a backwoods kind of way.

Fly- 1 Two chord rock riffs with amp noise, and vocals that sound like Pollard's singing gibberish into a scarf.

Electric Indians- 1 Sparse, reverberating guitar with Pollard spoken beat poetry over it. Surrealist writing is appreciated for Pollard's part, but music wise... what?

That Girl Moore- 1 Those vocals! What in the world? Hillbilly drunken comedy thing.  Not worth a damn, but good for a laugh.

SIDE D:
Some Of The Magic Syrup Was Preserved- 4 If there were a pre-Circus Devils demo, this would be the track that spawned the fire. Eerie and bizarre. Again, like a good Nightwalker track, this is moody improv gone right.

You The Doctor- 2 Punk-spy themed number, with Pollard shouting vocals. 55 seconds but only 30 seconds of actual song.

Let's Go To China (Where The East Is Good To Me)- 4 Pollard solo on this with acoustic guitar. Has a Mountain Goats feel (pre-Mountian Goats, of course). A bit long, but the least sporadic track on here.

Scary Out There- 1 Moody, wish-wash guitars. Pollard's almost onto a short snippet tune but is WAY off-key. Short, but scrap.

Cath- 2 Horse as all hell, Bob Pollard does a Ted Leo tune (pre-Ted Leo, of course, and of course they apparently hate each other.  Refer to the James Greer book Learning To Hunt).  Forget this though.

Frogmen- 3 Yeah, you know. Frogmen. Simple, and whisteable tune from the dusty corner of the basement. Tremolo guitar as Pollard sings a decent tune over it. One of the better tracks from disc 2 of this wax pack.

Beatles And Stones- 4  Nearly 7 minutes long! Acoustic strumming and Pollard surreal beat-poetry. Recorded in the '80s, but reminiscent of the classic GBV direction but without the full execution. A glimpse of things to come. Super long, but put it on and kick back to the lo-fi pre-GBV rattle.

Salvation Army Bacon And Eggs- 1 Electric guitar jangle. Out of tune vocals. Pollard does some storytelling. Weird but you know... I don't know?  Then he barks like a dog. But you know...?  I still don't know.