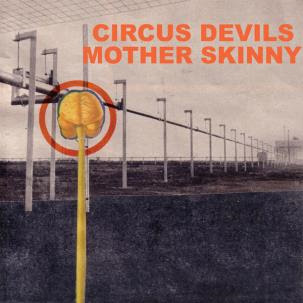 Following their most accessible effort with 2009's, acoustically based, pop dusted Gringo LP, Circus Devils returned with an assaulting follow-up, Mother Skinny. Laced with some truly hard-rockers, psych drones, and short bursts of madness, Mother Skinny had more in common with 2008's Ataxia, than its predecessor.

And much like Ataxia, Mother Skinny is full of some dizzyingly fun rewards, while also housing and some dank blips of mundane snooze. The LP has a blanket nursery rhyme feeling to it, albeit, a darkened one. The main downfall of this album is the amount of songs that feature  Pollard sporting a deadpan delivery over Todd Tobias's fairly uneventful riffs.  At times, it's enough to make even the short and weird snips feel long and forced.

SIDE A:
Sub Rat- 5 Ethereal drones frighteningly burst into a chugging tribal death march that drags you through a ring of fire, out to the field where the sacrifice happened. Great psych vocal on this too! Whoa.

Get On It- 1 Another asinine, hard-rocker that does in fact have a decent bridge. BUT, the ridiculously annoying vocal and guitar pattern makes one want to stab their brain. Pollard repeats the title so much, it's impossible to get out of your head, but in the worst way.

His Troops Are Loyal- 2 For a battle cry song, this is pretty spot on. However, it sounds like some kitschy tune they might play to pump up the home crowd at a sports arena. Annoying hook creeps up the base of the neck. Again, in a bad way. I can do without this.

Kingdoms Of Korea- 2 Slow, dripping death march again. Feels like dragging the chains behind you, on this one. Sad elephant type drones are about the only thing of note here.

Bam Bam Bam- 4 Nursery rhyme feel is present here, as Pollard rhythmically sings to every drum accent. Okay, that may sound stupid, but after a few listens, it finds a place.  A definite bright spot after a bunch of clunkers.

Legs To Love You- 3 Circus Devils goes funk on this one, as Pollard pulls a poor man's Robert Plant on vocals. Post-punk repetition shows its face here, and it teeters on being completely lame but just works, by the skin of its teeth.

SIDE B:
17 Days On The Pole- 2 Misery drones open Side-B. This track can be likened to seeing a dim beacon of light in a gooey pile of muck, but just not enough to crack the surface.

We Don't Need To Know Who You Are- 3 Woozy organ accompanied by hushed psych vocals. Haunting little snippet song. At 55 seconds, this might be the first sign of life for Side-B.

A Living Necklace Of Warts- 2 Nope. Never mind. A decent upbeat riff rocker with a maniacal sideshow feel gets shit on by Pollard's unforgivable vocal delivery on the verses coupled with just too silly of lyrics.

The New Nostalgia- 1 Dark, dank, forgettable. In fact, the complete opposite of nostalgia. Drum is banged. Drone on.  Vocals. You get it.

The Cave Of Disappearing Men- 1 A slightly changing drone track for 40 seconds. No vocals. Again, you get it.

Mother Skinny- 5 Opens with one of the most chillingly atmospheric soundscapes of the cannon. The feeling of this one lies somewhere between waking up alone in the woods, and stumbling upon a carnival on fire. Diabolical organ pattern repeated over the surrealist drones, and psych-Bob ranting. Again, chilling. In the best way.

All The Good Ones Are Gone- 4 Ahhh, the morning after the nightmare. Like waking up and realizing you're alive after a serious all-night bender. And boy, are you thankful! If the previous track was the descent, this one's the redemption. It's a piano ballad, and one can certainly picture Circus Devils at the baby white grand piano on a new Sunday dawn on this.

Pledge- 3 Beaten, battered; a bruised track of hopelessness. Like trying to make your way home on foot after the wreck. Surreal, declarative, but emotionally resonant vocals from Pollard.

Shut Up- 4 Looped cries of "SHUT UP!" play on infused with pulsating bass as Pollard sings. Unsettling, grating, and for sure a proper way to end Circus Devils' arguably darkest LP.