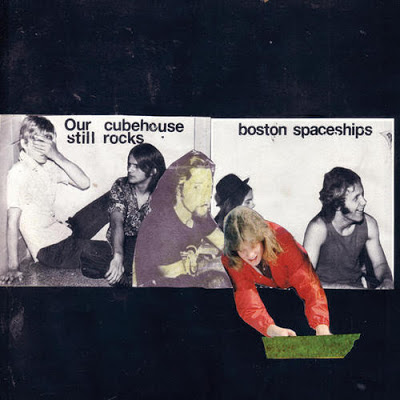 The fourth Boston Spaceships LP in 3 years. The same Boston Spaceships recording formula takes place as the past records. Chris Slusarenko (ex-GBV, The Takeovers) plays all the instruments while John Moen (Decemberists) plays drums, and Pollard handles the vocals/melody lines. The entire record proves to be the most solid of the catalog, perhaps. It also has the most '70's/'80s radio rock feel to it that is pulled off rather effortlessly. A few harmless duds appear on this , but no real pieces of shit on this full-length.  Boston Spaceships continued their reign of glory for another year.

SIDE A:
Track Star- 4 Evidence given that Pollard's writing process is mumbling shit into a tape recorder of some sort. Well,t hat evidence is leaked in the first 10 seconds of "Track Star." But then, the song explodes into an ambitious, catchy as fuck, mini-rock opera that propels the LP into territory unseen for Boston Spaceships thus far. Not the greatest, Pollard track, but a real jolt in the ass.

John The Dwarf Wants To Become An Angel- 5  Mid-tempo pop greatness that shines a bright light on rehashing late '90s GBV.  A brief 2:49 that is radio ready. Melancholy and bouncy. Indie rock lives! Oh yeah, that title is for the birds though.

I See You Coming- 4 This sounds like a stream of conscience, Pollard late-night tune recorded into a boombox and distributed to Boston Spaceships.  However, Slusarenko and Moen make due with this lazy tune, carried by an effortless Pollard melody.

Fly Away (Terry Sez)- 3   GBV tribute seems to being paid toward this one. The verses are clear UTBUTS/Mag Earwhig! style songwriting.  However, the choruses are flat out boring and stink of Pollard solo recorded toss-offs.  Such a damn shame.

Trick Of The Telekinetic Newlyweds- 3  50 second intro of vocals and reverb slathered guitars break intro mid-tempo format of the same, but with drum backbone. Song doesn't really go anywhere, but is a pleasant mid-tempo stall track.

Saints Don't Lie- 3  Bar room guitars sway in sleaze pop, power-chord riff fashion as Pollard sings surprisingly melodically over them giving you an unexpected poke in the ribs. The chorus is as stead and satisfying as the verses. Solid for a track that seems doomed to be monotonous.

The British And The French- 3  High tuned guitar part gives this an elfin feel.  Pure Brit-pop as Pollard pulls out an extra special British accent. Pretty goddamn cheesy. Undeniably, catchy. OR, some might wanna punch this song's face in.

Unshaven Bird- 4 Closing out the A side, this tune beings with a breezy, vocal melody before kicking into arena rock mode, dropping out, and then back into indie guitar picking.  Laid back, killer side closer! Like a thick moss, it grows slowly. What?

SIDE B:
Come On Baby Grace- 4  Stupid as shit lyrics flower into pure stupid as shit power pop riff. But, like a stupid shit, I can't resist. The song never gets too sweet, breaking into a semi-Springsteen chorus.

Freedom Rings- 3 The longest track of the LP, lasting nearly 4 minutes. "Freedom Rings" starts off lo-fi, breaks into normal LP mode for this record, and proceeds to spew out a bluesy riff rocker akin to a Zeppelin line.  None too original. But certainly not terrible by any means. As a concept, it kind of rules.

Stunted- 2  Stunted is essentially what the title implies.  A stunted 11th track in the LP sequence.  After a solid sample of songs, "Stunted" falls on partially deaf ears.

Bombadine-  2 Assaulting guitar and drum fills stretch closer to a lost denim rock period phase. Out-of-left field orchestral electronics pop in too! Why the fuck not?  Not worth spitting in disgust, but far from a jaw dropper.

Airwaves-  3 Smoking pot in the '70s has paid off for our faithful crew. Think Elton John, maybe? Easy paced acoustic lead (electrically backed) song.  "Airwaves" is a pure bullshit throw-away to days past that works wonders.

King Green Stamp- 3  Short, unmemorable stream of lyrics over slow anthemic guitar deceleration.  Not bad by any means.  Just a nod, and a shrug.

In The Bathroom (Up 1/2 The Night)- 3 A closer with this title has the potential to be the worst thing ever heard by anyone ever.  However.... This song delivers so well, that I almost can't contain myself, with its anthem delivery.  Still, Pollard sings "In the bathroom, up half the night" over and over, and I remember what this song is all about.