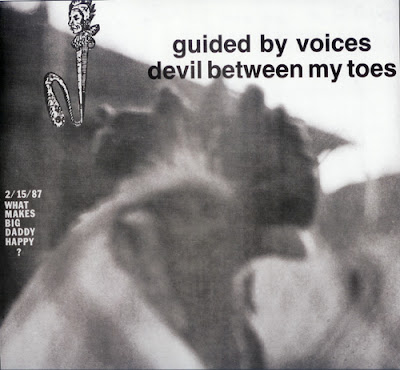 Unlike Forever Since Breakfast EP, GBV's first LP is a cluttered bag of fidelity, and a complete hodge-podge of song writing styles and all around erratic behavior. While it previously seemed that the basis of mid '80s college rock was par for the course, Devil Between My Toes throws that out the window with mixed results that, for the most part, don't connect. Which of course begs the question; what REALLY makes Big Daddy happy?

The LP was released at a time when GBV had just taken a sabbatical from playing out. After a handful of live shows over the past few years, they had entered a period of finding-one's-footing. Important note- Devil Between My Toes is the first release to contain future GBV main-stay and songsmith, Tobin Sprout!

SIDE A:
Old Battery- 4  REM phase GBV kicks off the album.  Wavering vocals seemingly pasted on top of music track. Great guitar riffs throughout. Production is actually distracting, but overall a solid opener.

Discussing Wallace Chambers-  3 Tom rolls lead in to more 80’s college rock. Clean guitar strums back stabbing lead lines.  Not bad, but if it were a single, it’d be destined for the dreaded dollar bin.

Cyclops- 3  Holy reverb hell. Eerie, un-GBV sounding song. Similar to something They Might Be Giants might do down the road. Similar style later pulled off of Pollard solo records. A truly out of place gem.

Crux- 2 Ultra-lo-fi sounding instrumental surf rocker. The drums genuinely sound like a spoon hitting tissue paper.  Why is this a song?

A Portrait Destroyed by Fire- 1  The long one on the record!  Starts off sounding like something in between Slint and Jandek. The track does eventually kick in, but who cares at that point? Continues on sounding like bad Joy Division and middle school jam metal.

SIDE B:
Dog’s Out- 3  After 2 instrumentals and a painfully long song, Pollard finally starts singing again.  Multi-layered chorus.  This song teeters on the brink of being a tame cock-rocker and joyfully catchy, Beatles tribute. Also baffling, but on the much more enjoyable side.

A Proud and Booming Industry- 1 Guitar drones taped on a boombox?  Yup, pretty much. Cool title falls flat due to waste of record space.

Hank’s Little Fingers- 4 Listen to British pop-much?  Pollard does and that's what I love about the guy. Top of the Pops worthy, get ready for some painfully catchy hooks.

Artboat- 1 Return of the reverb guitar. More senseless, demonic noodling, and droning with no directing. Third instrumental of the album. If this is what an Artboat(?) is, I’d rather swim.

Hey Hey Spaceman- 3 I heard Peter Buck filed a police report for a missing riff after hearing this.  Definitive college rock riffage on this. Still, simple and undeniably catchy.

The Tumblers- 3 Dreamy sounding, percussive number that takes a surprising nod to Peter Gabriel. Is that a flute fluttering in the background?  This song is very unlike what much of GBV would tackle in the future. Can’t decide if this is wholly embarrassing or actually pretty cool.

Bread Alone-  2 Yup, instrumental number four.  Gets a 2 for not being as unlistenable as the last two instrumentals before this.  Songs like this are perfect examples of how to turn a decent EP in to a pretty confusing album.

The Captain’s Dead-   5 The highlight of the record.  Late ‘60s psychedelia vocals, with swirling garage guitars played with urgency.  Filled with simplistic hooks, and the the first arguably great garage punk of GBV’s career.