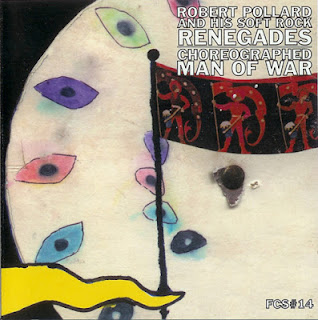 Sandwiched in between Guided by Voices Isolation Drills and Universal Truths And Cycles, Robert Pollard put out a one-off release with his new band, His Soft Rock Renegades.  A no-frills 10 song affair, the LP features Pollard on vocals and guitar, bassist Greg Demos (GBV, The Sunflower Logic), and Jim Macpherson (GBV, The Breeders, The Amps). Interesting to note, Demos and Macpherson both played on GBV's Do The Collapse LP. Here, we get a reunion of Dayton minds, teaming up with friend/engineer John Shough. Three tracks off the LP were later adopted for Guided by Voices live shows (and "7th Level Shutdown" for a solo-Pollard tour).


SIDE A:
I Drove a Tank- 5  A mid-tempo, heavy hitting classic rock formula. Epic, anthemic. Great melancholy, monotone hooks that make you form a fist, pump it (perhaps in your car), and make you feel none the lamer for doing so.

She Saw the Shadow- 3 Moderate build-up to a decent song. Repetitious choruses that follows exact guitar leads keep this from being great.

7th Level Shutdown- 3 Plodding at points, off-key Pollard vocals at others. Decent, but unmemorable. Feels like it contains elements of some of the more unlikable GBV songs of their early '00s LPs.

40 Yards to the Burning Bush- 4 Constructed mainly of a solo guitar riff complete with full band bursts of epic proportions. Triumphant vocals in the second half leads to a satisfying conclusion.

Citizen Fighter- 3 Crunchy riff that relies more on attitude than creativity. Fastest of the songs so far. Cool fractured solo in the middle, and high-flying vocal melodies to the end.

Kickboxer Lightning- 4  Perfect mix of Pollard’s heavier material, and pure over-the-top pop hooks. The nasally vocal stylings are a bit irritating, but undeniably catchy. If anything, a little too long for its own good, complete with The Who influenced epic ending and all.

Bally Hoo- 2 Slow stoner-esque jam, continually shifting between pounding crunchy dynamics, and soft guitar jangle before breaking into a grinding rocker sham. Muddled grab-bag of potentially good ideas. The “Baby Hold On’ also sounds mysteriously a lot like the chorus to “Drive a Tank” as does the whole ending part.

Instrumental Beetle- 2 Sparse, one guitar strummin', track. Pollard delivers hushed vocals in the forefront. Explodes into sonic proportions. The song’s been done before and more effective in the hands of many bands you’ve heard play sludgy tempos with blaring, droney guitars. The mid-fi nature of the record does no service to the song. By the time the voice-over appears mid-way, you’re wondering when it will all end.