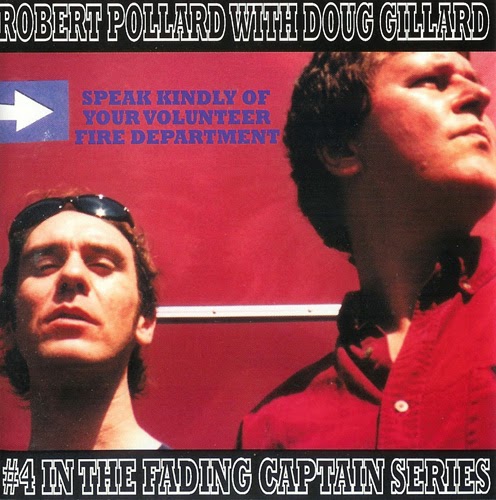 1999 found Cobra Verde guitarist, Doug Gillard, in the midst of the late '90s Guided by Voices roster as lead guitarist, and all around string virtuoso in the greater Ohio state area. This potential Pollard solo release marks the first properly annotated collaboration between Pollard and Gillard.  This comes 4 years prior to the two striking out again on '03's Lifeguards LP, Mist King Urth.  The brilliantly named LP strikes up a few brilliant moments in this early Fading Captain Series release.

SIDE A:
Frequent Weaver Who Burns- 4  Light, British-tinged pop.  Acoustic driven, and cheery.  Melodies flow like a saccharine river. Just don’t listen to the lyrics.  Pretty ridiculous there.

Pop Zeus- 5  Irresistibly good lead guitar lines that completely make the song. Driving, pogo-pop. Hell of a collaboration. Get on your fucking roof and yell this at the postman or neighborhood dog walker, because it’s that good.

Slick as Snails- 2  Long, run-of-the-mill, small stadium rock snoozer. Almost epic, but can’t seem to get out of its mid-fi way. Always boarders on having a good hook, but always seems to fall short.

Port Authority- 2  Layered guitars and vocals make up this weird, over-long track. Poor guitar effects that meander on too long while tumbling drums bang away in unison.

Soft Smoke­-  2 Acoustic chord strums while Pollard talk-sings some crazy avant-garbage.  Under a minute of forgettable poetry. Spills into the even more surreal…


SIDE B:
And I Don’t (So Now I Do)- 4  Mid-tempo, acoustic driven GBV sounding song. Sounds like it could have been amped up enough for Isolation Drills. Decent, lone sung melody in the chorus. Vintage radio-pop “ohhhs and ahhhs” included at no extra charge.

I Get Rid of You- 1  Tremolo shellacked guitars and heroin-rock, guitar noodling. Dark and dripping bad dream in the land of Prog.

Life is Beautiful- 2 Open room vocal sound is amazing!  However, this song is not.  Verses seem to show promise, but the rest of the song is Pollard singing along to every weird guitar rhythm that’s hit. The sullen, airy “Life is Beautiful” part is pretty but also kind of unnervingly sappy.

Messiahs- 2 The lead line is so silly that it’s pretty awesome. Sounds like a warped kids toy. But beyond that, the song is dismissible. Not much in the way of melody, song goes nowhere, and it sounds unmixed.

And My Unit Moves- 3 Piano pounds away as Pollard deeply croons.  Seems like they ran out of other instruments to carry the last two tracks of this thing.  Mildly catchy, mildly depressing closer.