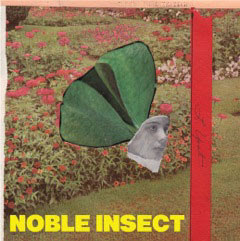 The 5th of five singles, released every two weeks, up until the release of the 4th GBV reunion LP English Little League.  Contains two exclusive b-sides.

SIDE A:
Noble Insect is reviewed as a part of the LP English Little League.

SIDE B:
Waves of Gray- 4  Tobin penned piano driven track.  British sounding as all hell. Pensive heartstring tugging and all. Awesome.

See You Soon- 3 Pollard's piano driven counterpart to Tobin's "Waves of Gray" almost manages to tug the heartstring a bit before it breaks off into vocal reverb madness and almost completely falls apart. One half charming, one half silly without the charisma.