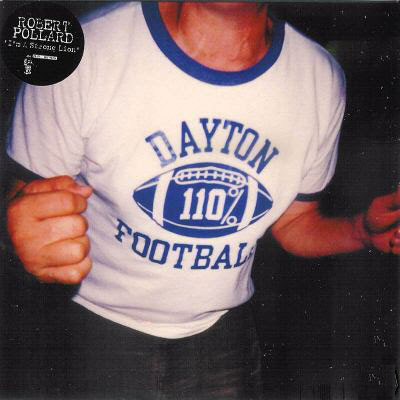 Released 5 weeks prior to the release of Robert Pollard's double LP From A Compound Eye, the single for "I'm a Strong Lion" came out on the Must Destroy Music imprint out of the United Kingdom.  The single was available on both 7'' and as a CD single (both limited to 1000 copies each).  However, the CD version included an extra track, "Inchworm Parade" exclusive to the disc.  Goddammit! Grab the CDs while you can, if you can fine 'em.

I'm A Strong Lion-  Same version as on From A Compound Eye.  Read review there.

Breadcrumbs For The Whales- 2 Acoustic plucking that fades out, into silence, then comes back as quieter acoustic, barely audible plucking, and hushed vocals. Eventually gets some muscle behind it, with heavier guitar strums. The extended intro is needless, and the song is a fairly forgettable 4 minutes.

Inchworm Parade- 3 Another acoustic tune, but much crisper than the previous track production wise, and actually tuneful.  Gets a little lost in it's meandering, but some bright moments arise.  Pollard even utilizes the rare "mouth trumpet," to close it out. Don't ask. Just listen.
Posted by Eric Truchan at 10:12 AM