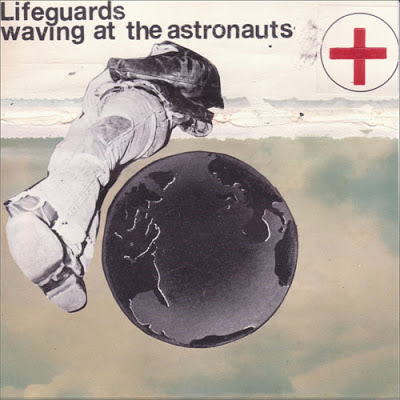 It appeared as if another Pollard related side-project had gone the way of the dodo, until 2010 when another Lifeguards 7'' surfaced. With little warning, the new Lifeguards Product Head 7'' arrived featuring a new track from a new LP.  In 2011, said new LP Waving At The Astronauts saw the light of day, and Lifeguards was back with a brand new 10 song LP, 8 years after the fact.  Extremely slow going in Pollardian terms.

Lifeguards still functioned as it did on their previous LP, Mist King Urth. Former GBV/Cobra Verde guitarist, Doug Gillard, played and recorded all the instruments. Pollard added vocals, lyrics, and titles to Gillard compositions. The LP proves a slight improvement over its predecessor, but still remains a bit of an uneven listen.

SIDE A:
Paradise is Not so Bad- 5  Wow! What a track. Acoustic pop strums interrupted with great fuzz-buzzing riff. Pollard’s vocals are punchy, powerful, right on key, and the lyrics are fantastic. What a great hook too. Harks back to the glory days of Pollardian melodies. At nearly 5 minutes, this song actually works throughout. The proggy interludes and outro are even solid, and scattered with serrated hooks.

(Doing the) Math- 3  Mid-tempo, semi-glum British influence, surrealist pop. Instrumentally solid, vocally strong, but fails with delivering that over the top moment. Solid minute and a half instrumental outro.

Product Head- 4  Released as the single for the LP. Post-punk and off-time riffs give this an industrial feel. Repetitive and hypnotic. Tremolo soaked sparse solo adds to the controlled madness. Fun trip to take.

You’re Gonna Need a Mountain- 2  Nearly 6 minutes of piano soaked weirdness. Psychofrenic and paranoid, Gillard frantically hammers away at the piano, adding obligatory noises while Pollard gives his best monotone of impending surrealism. There, I saved you 6 moody minutes of madness.


SIDE B:
Sexless Auto- 2 Gillard’s been listening to Maiden again. ‘80s metal crunch and repetitive riffs drag on. Redeemablly listenable thanks to Pollard’s killer vocal performance and melodies that nearly save the song. Unfortunately, the song is too long and this pile of faux-‘80s metal is pretty lame.

Trip the Web- 3 Uptempo, acoustic bluesy pop with lazily drunken Pollard drawl. Not the sharpest hook in the tackle box, and a little cheesy too, but a nice mix of pop meets fucking weird.

They Called Him So Much- 3  Simple tune that’s catchy in a nursery rhyme kind of way. But Pollard's bellowing is so out of tune in the intro, it’s like listening to your favorite uncle pass a kidney stone. But, he rights his wrongs with hazy-pop vocal layering. Ambient and meditative.

What Am I?- 1  What a weak closer. Cringe worthy, ‘70s light organ rock that swings along with some downright terrible Pollard lyrics, and laughable vocal delivery. Sounds like a bad lounge act in space.