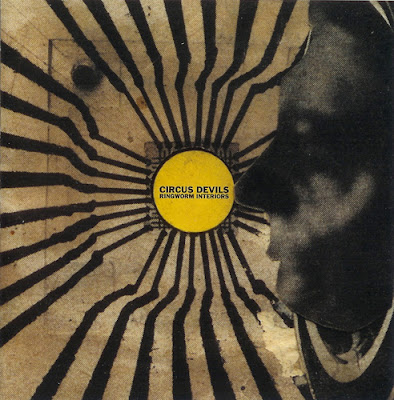 The first LP from Pollard's side-project Circus Devils would commence the 2nd longest running band moniker throughout Pollard's recording career.  The band, (used a a loose term) has never played a show, but continues to churn out quality nightmare, post-punk sounds-capes.  Take some of the best (or worst) Pollard fragmented ideas, and let those ideas be expanded into noisy dirges, with often intriguing, and sometimes flooring results.

Most songs on this debut fall under the 2 minute mark, a handful seemingly atmospheric snippets of noise-rock.  It's a heavily loaded, but rather easy album to get through in one sitting.  Well, I guess that all depends on what side of the fence one finds themselves on in the Circus Devils universe.

Also, reviewing individual Circus Devils tracks can be a bit daunting, especially on the first few albums. If you can hang with these LPs, your best bet is to let it ride straight through.

SIDE A:
Devilspeak- 3  Welcome to the world of Circus Devils.  You are in a dark, dank place. And your GBV safety net is nowhere to be found.  50 seconds of see-saw, industrial nightmare music sets the tone for the LP and the discography.

Buffalo Spiders- 4 Single chord guitar assault, with kaleidoscopic ambient swirl coming out of the right speaker.  Song comes to a halt during the turbulent bridge, before picking back up again as a Melvins-type sludge song. What started as a pretty formulaic song bleeds into more dank rock and rot.

North Morning Silver Trip- 2  18 second stop gap noise piece.  No reason for this to be a seperate track, when heard in the context of things.

Ringworm Interiors- 3  Tobias plays a back and forth distorted rock riff, with exaggerated guitar bends.  Pollard calmly recites his lyrics as the song pounds away for a minute.

Spectacle- 2 Slow burner compared to some of the piercing octane dished out already.  Flanged-out guitars pop in and out, as looped guitar distortion stabs away.  Acid burned nothingness here.

You First-  4 If there were to be a classifiable ballad on the LP, I guess this would be it?  Soft-rock as heard from the end of the dark hallway of delirium tremens.  Haunting trumpet effect carries the tune. What may have been a dud of a GBV/Pollard solo tune, comes out somewhat majestic on this.

Kingdom Of Teeth- 3  Harrowing organ noises out of one speaker. The devil playing guitar in a coal-bin in the other.  Super short, mood, movie-music piece.

Lizard Food- 2 Clanging guitars that break into swampy, grunge.  Pollard bellows some drunken sounding stuff in the background.  Sounds like a poor, rehashed snippet already heard on this LP.

Not So Fast- 1  26 second noise piece, as Tobias surely turned some knobs in the studio, and that was that. Big deal.

Apparent The Red Angus- 3 Starts off with acoustic plucks. A chance to breath after the aural vomit attack of the previous tracks.  Slow building, into steady '70s arena rocker.  The most Pollardian tune on the record, complete with big drums rolls akin to his early '00s solo work.  At 3 minutes, it almost feels epic.

SIDE B:
Playhouse Hostage- 3 42 second acoustic, pensive number.  Not much here, but sounds like an outtake from a Pollard solo record, or mid-90s GBV EP material.

Straps Hold Up The Jaw- 4 Organ hits and swirls that sounds like some semblance of a Beach Boys nightmare.  Spits into steady, hard rock sludge as a pissed-off, declarative Pollard delivers vocals.  Also includes the line "waving at the astronauts," which would later become the name of the 2nd Lifeguards LP!

Correcto- 3 25 seconds of swirling noises cut out and into distant, reverberating, staccatto guitar, "string" effect hits.  A sad fucking fiddle comes out of one speaker.  Pollard croons away with blanket, chanting melody.

Star Peppered Wheatgerm- 2 Slow as dirt; drum hits and bristly guitar drag this along.  Like watching grass die. Picks up in the middle.  A little too formless for its own good, as this nearly pushes the 3 minute mark.

Decathlon- 1  45 seconds of what sounds like a steam pipe ruptured, and then a organ played triumphantly in its honor.  What?  Is that a thing?  It is now.

Peace Needle- 3  A darkly whimsical melody sounds like it's played through a slide whistle, repeats throughout.  Pollard sings in the distance, vocals bouncing off the empty chamber walls. Total mood piece. Depressing as shit.

Protect Thy Interest- 2 Sounds like another long night in the belly of the whale. Captain Beefhart noise blasts, with faux sax noises, and marimba knock arounds.

Sterility Megaplant-  1 Sounds like the main frame is on the fritz again, sparks and all.  Or sounds like a robot slaughter-house.

New You (You Can See And Believe)- 3 Mock arena cheers emerge, and song kicks off like... well, an arena rocker.  Straight guitar, drums as Pollard delivers his fan boy, big stage delivery.  Not really a Circus Devils song.   I believe Tim Tobias plays some lead guitar on this one.  Kind of lame. Kind of awesome.  AND THUS CONCLUDES THE WORLD TOUR...

Circus Devils Theme-  2 ... but not before one more sleepless lullaby spiraling baby toy comes whirling in.  Tis the Circus Devils theme.  Close your eyes. Sweet dreams, and don't choke on your vomit.