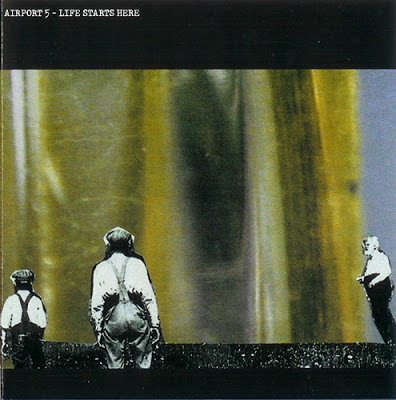 The 2nd, and to date, final Airport 5 record hit the world with a shrug in 2002. All of the bright spots the might have shone through in the debut pretty much fizzle upon impact here. Again, the powerhouse GBV combo of Tobin Sprout and Robert Pollard teamed up for another go round of home recorded tunes. Tobin Sprout recorded the music in Lealand, Michigan while Pollard recorded vocals in Ohio. Unfortunately, this LP is essentially one drab outing from the two both musically and vocally. Following this LP, the Airport 5 ship was permanently grounded. Flying pun!

SIDE A:
Intro- 2 Dark, bouncy piano intro with Pollard’s surreal, ominous vocals on top. Opener mood track, but not much else.

We’re in the Business­ - 4 The surreal intro doesn’t lead into an equally weird track, but DOES lead into an airy East River Pipe sounding rendition of lofty bedroom pop.  Some poor, out-of-tune singing by Pollard hurts a bit, but an overall standout

Yellow Wife No. 5- 4 Cold, wintry pop track with simple, melodic hooks. You can almost see your breath while listening to this distant track.

Wrong Drama Addiction (…And Life Starts Here…)-  1 Repetitive vocal riff of “And
life starts herrrerrerer…), over and over again. Hypnotic, for sure. Oddly soothing even.  Yea.  But at 7 interminable minutes in the middle of the album, it is to say the least, daunting. 3 minutes of recorded rain and muddling around at the end.

However Young They Are- 2 Adult contemporary stuff that sounds like it should be playing in a documentary about the saving of the rain forest or something.  Hackneyed percussion, and far too LiteFM.

The Dawntrust Guarantee- 1  Bad robotic pulsating noises, and modulated vocals over one plus minutes of junk noise. No thanks.

SIDE B:
Forever Since- 2 Light track.  Upfront vocals in desperate need of a touch of reverb, and feathery strums leading the way behind it.  Not much of note here.

Impression of a Leg- 3  One of the catchiest vocal hooks on this album, even if Pollard doesn’t always seem to be singing with the muted music in the background.  He seems to be off on his own melodic trip, but no matter.

How Brown?- 2 Wire thin guitar lines, steadily holding it together with automated hi-hat hits buried underneath Pollard crooning, and a rather epic GBV sounding chorus. The song, however is about 2 minutes longer than necessary.

Natives Approach the Plane­- 1  Kill me. Repeat over and over on top of crappy, dated music released 10 years after it sounds dated.

I Can’t Freeze Anymore- 1 Another cold sounding robotic track. Sounds like it’s played from inside a frigid factory in outer space. You know, where all the music comes from? Pollard can’t do much with this since the music’s so damn bad.

Out in the World- 3 Silly blips and bloops, but a great vocal performance saves this song. Somehow becomes catchy, and a strange closer to a cold, dull album.
Posted by Eric Truchan at 12:31 AM