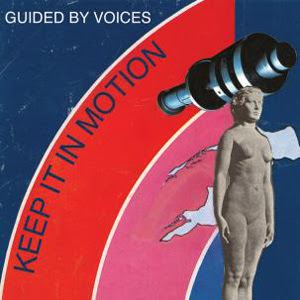 This was the first of three 7'' singles released off the 2nd GBV reunion LP Class Clown Spots a UFO.  It contains two b-sides, both exclusive to the 7''.  Limited to 1,000 copies on pink vinyl.  Released in the UK on Fire Records.

SIDE A:
Keep It In Motion - Same version as reviewed under the LP Class Clown Spots a UFO. You can read the review there.


SIDE B:
White World: 5 My first thought upon hearing the steady down stroked opening is "... reminds me of "Debaser." Second thought, "Holy shit a solid fucking '90s GBV song!" This is the first of the reunion songs with no weird quirky frills, or botched productions for reminiscent sake. Just an absolute killer short shot of punk pop, with synth horns that actually make the song better! What? WOW!

Pink Wings: 3  Pollard must have had too much material for the new solo LP and threw this one on here.  Abbey Road-esque b-side harmonies over acoustic plucking while Pollard spews reverebed poetry.  Not bad.  Not terribly good either.  Hey, mood pieces are nice. Right? Well, I think they are.
Posted by Eric Truchan at 9:34 PM