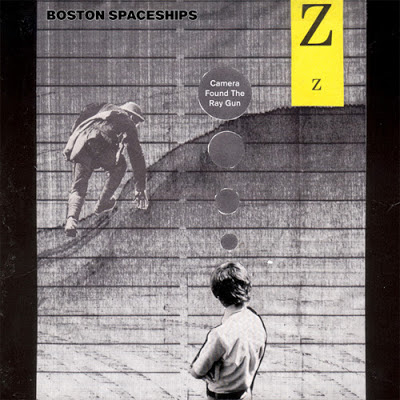 After the Boston Spaceships LP Zero to 99, the band released this teaser 4 song EP on limited 7'' and CD.  The b-sides are two rerecorded, full band versions that appear on Disc 12 (overall) of the third Suitcase installment under the Guided by Voices moniker. No singles are included from any LPs, all tracks on this are exclusives.

Rival GT- 2 Not the best Boston Spaceships material.  Kind of a big mess of parts jumbled together, played off time, but with a Boston Spaceships conviction. It's like trying to mask a Acid Ranch song by playing it like Lexo and the Leapers! And if you know what that means, you're at the right place. Or maybe we should both just kill ourselves!

SIDE B:
(both B-sides appears as early acoustic versions on Disc 12 of the Suitcase box-sets.)

Pluto is Polluted (Different Version)- 3  Weirdo, electric version of an early GBV demo fully fleshed out.  Hey, there's a maraca in this one!   "Pluto is Polluted" gets better with repeated listens.

Aquarian Hovercraft (Different Version)- 4 Another fleshed out early GBV demo comes to life. It's a tight as taught twine, full band take on it.  Songs is extreme in its transitions, but is pretty fucking great, unlike some often hit or miss Pollard multi-sectioned songs.  Rapid fire, desperate lyrics, and some great mid-fi orchestral madness near the end.
Posted by Eric Truchan at 10:25 AM